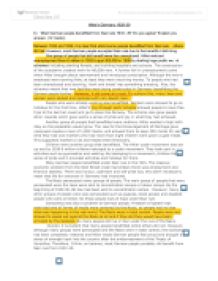 Most German people benefitted from Nazi rule 1933-39 Do you agree? Explain you answer.

Eloise Sear 11P Hitler's Germany 1929-39 b) 'Most German people benefitted from Nazi rule 1933-39" Do you agree? Explain you answer. (12 marks) Between 1933 and 1939, it is clear that whilst some people benefitted from Nazi rule, others did not. However, most German people accepted Nazi rule due to the benefits it did bring. One group of people that did benefit were the unemployed. Hitler reduced unemployment from 6 million in 1933 to just 300,000 in 1939 by starting huge public work schemes including planting forests, and building hospitals and schools. The construction of the autobahns created work for 80,000 men. A further fall in unemployment came when Hitler brought about rearmament and introduced conscription. ...read more.

Another group of people that benefitted were mothers. Hitler wanted a high birth rate, so the population would grow. The Law for the Encouragement of Marriage gave newlywed couples a loan of 1,000 marks, and allowed them to keep 250 marks for each child they had and mothers who had more than eight children were given a gold medal. This supported mothers a lot and helped them financially. Children were another group that benefitted. The Hitler youth movement was set up and by 1939 8 million children belonged to a youth movement. They took part in activities such as gymnastics and walking. By belonging to a movement, children felt a sense of pride and it provided activities and holidays for them. ...read more.

Freedom of speech was restricted and all forms of media were censored by the Nazis, so people had no idea what was happening in the real world. The Nazis were in total control. People were not allowed to speak out against the Nazis at all and if they did they would have been arrested by the Gestapo. So many people did live in fear under the rule of the Nazis. Overall, it is evident that many people benefitted whilst others did not. However, although many groups were persecuted and the Nazis were in total control, the economy had been completely restored and Hitler made German people feel proud and brought a sense of strength back into the country after the embarrassment of the Treaty of Versailles. Therefore, I think, on balance, most German people probably did benefit from Nazi rule from 1933-39. ...read more.

This is a sound response that stays focused throughout and makes good use of statistics to provide evidence. More examples of individual experiences would have been useful and the introduction could be improved. 4 out of 5 stars.