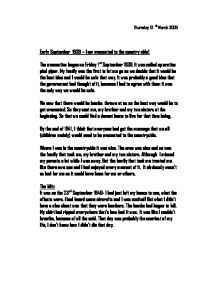 Thursday 12th March 2009 Early September 1939 - I am evacuated to the country side! The evacuation began on Friday 1st September 1939. It was called operation pied piper. My family was the first to let me go as we decide that it would be the best idea and I would be safe that way. It was probably a good idea that the government had thought of it, because I had to agree with them it was the only way we would be safe. We new that there would be bombs thrown at us so the best way would be to get evacuated. ...read more.

Although I missed my parents a lot while I was away. But the family that took me treated me like there own son and I had enjoyed every moment of it. It obviously wasn't as bad for me as it could have been for me or others. The blitz It was on the 23rd September 1940- I had just left my house to see, what the effects were. I had heard some aircrafts and I was excited! But what I didn't have a clue about was that they were bombers. The bombs had begun to fall. My shirt had ripped everywhere that's how bad it was. ...read more.

I didn't think they had put much effort to make them, but we all had to put them on so I did too. After a while I got used to the smell but it did make me feel sick at first. After a few weeks I was getting the hang of it and I didn't mind to put the mask on. I did feel sorry for my little sister who would have had to be put in the big mask, which would cover her whole body and let her legs dangle just about, down the bottom and my mother would have to pump the gas mask with the hand pump. In the end the gas masks wasn't needed, because they didn't use gas bombs. ...read more.