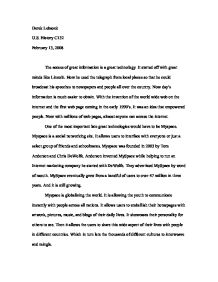 Myspace, a new technology that makes the world flat

Derek Lebsock U.S. History C132 February 13, 2008 The access of great information is a great technology. It started off with great minds like Lincoln. How he used the telegraph from local places so that he could broadcast his speeches to newspapers and people all over the country. Now day's information is much easier to obtain. With the invention of the world wide web on the internet and the first web page coming in the early 1990's. It was an idea that empowered people. Now with millions of web pages, almost anyone can access the internet. One of the most important late great technologies would have to be Myspace. ...read more.

Which in turn lets the thousands of different cultures to interweave and mingle. Communication and the sharing of information and cultures is a great idea that has been around as long as Napoleon. Now it is being shared with among the youth and everyone by using Myspace. It is a great tool for everyone to use. In fact while researching the philosophy of free information I came upon a Myspace group that was discussing this very topic. The group was open for everyone to input their ideas. The people ranged from all corners of the U.S., Europe, and a couple of people from Asia which goes to prove that Myspace is globalizing the world. ...read more.

It is so popular that many big corporations use it to advertise their products. And it is globalizing the world. In fact many cell phones now come with a mobile version of the Myspace program so that you can access it from anywhere with just a push of a button. The fact that Myspace is just a blank space for you to show your creativity and artistic abilities is what makes it great and unique. It is not just any program on the internet, it is your program and you can do with it what you want to. They just give you the information and the freedom to create your own little world and to share that with the rest of the world. Myspace has globalized the youth world, to be truthful; it's flattened the world we live in today. ...read more.