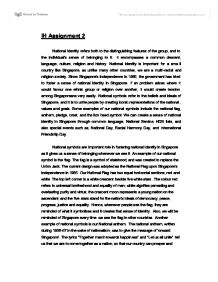 IH Assignment 2 National identity refers both to the distinguishing features of the group, and to the individual's sense of belonging to it. It encompasses a common descent, language, culture, religion and history. National identity is important for a small country like Singapore, as unlike many other countries, we are a multi-racial and religion society. Since Singapore's independence in 1965, the government has tried to foster a sense of national identity in Singapore. If an problem arises where It would favour one ethnic group or religion over another, It would create tension among Singaporeans very easily. National symbols refer to the beliefs and ideals of Singapore, and it is to unite people by creating iconic representations of the national, values and goals. Some examples of our national symbols include the national flag, anthem, pledge, crest, and the lion head symbol. ...read more.

Hence, whenever people see the flag, they are reminded of what it symbolizes and it creates that sense of identity. Also, we will be reminded of Singapore every time we see the flag in other countries. Another example of national symbols is our National anthem. The national anthem, written during 1956-57 in the wake of nationalism, was to give the message of 'onward Singapore'. The lyrics "Together march towards happiness" and "Let us all unite" tell us that we are to come together as a nation, so that our country can prosper and grow towards success. The national anthem is played in all schools, radios and television everyday in the morning. The students are to sing the national anthem and recite to pledge. This is to foster national identity in students from a very young age so that they will constantly be reminded to be united as a country and grow to have a strong sense of national identity. ...read more.

As the majority of people in Singapore were Malays at that time, Malay was the main language and many children would have known it. This probably explains why most of the words in Singlish are from Malay. Also, those children were exposed to teachers from many different countries and regions in different level of studies and hence, exposed to many varieties of English. With the increase of Chinese people in Singapore, Singlish is also influenced by the Chinese language. As Singlish is integrated into our speech, we use it in every little part of our lives through conversing with others everyday. It builds up a sense of common bond between people and also sounds friendlier compared to Standard English which some of the older generations would not understand. Hence, I feel that sharing a common language is able to foster a sense of national identity as it is something close to us. Done by: Chan Karyan (03) Class: 307 ...read more.