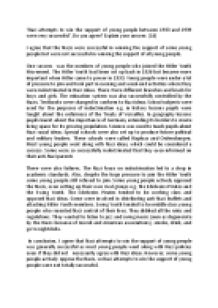 Nazi attempts to win the support of young people were successful. How far do you agree?

in history lessons pupils were taught about the unfairness of the Treaty of Versailles. In geography lessons pupils learnt about the importance of Germany extending its borders to create living space for its growing population. Science was used to teach pupils about Nazi racial ideas. Special schools were also set up to produce future political and military leaders. These schools were called Naploas and Ordensburgen. Most young people went along with Nazi ideas, which could be considered a success. Some were so successfully indoctrinated that they even informed on their anti-Nazi parents There were also failures. ...read more.