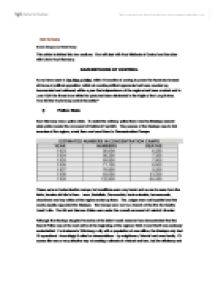 Nazi Germany Revision. This article is divided into two sections. One will deal with Nazi Methods of Control and the other with Life in Nazi Germany.

Nazi Germany Modern European and World History This article is divided into two sections. One will deal with Nazi Methods of Control and the other with Life in Nazi Germany. NAZI METHODS OF CONTROL As we have seen in The Rise of Hitler, within 18 months of coming to power the Nazis had erased all forms of political opposition; within six months political opponents had been rounded up, incarcerated and outlawed; within a year the independence of the regions had been crushed and in June 1934 the threat from within the party had been eliminated in the Night of the Long Knives. How did the Nazis keep control thereafter? i) Police State Nazi Germany was a police state. To assist the ordinary police there was the Gestapo (secret state police) under the command of Reinhard Heydrich. The purpose of the Gestapo was to find enemies of the regime, arrest them and send them to Concentration Camps. ESTIMATED NUMBERS IN CONCENTRATION CAMPS YEAR NUMBERS DEATHS 1933 50,000 6,250 1934 56,250 7,300 1935 65,850 7,900 1936 71,150 8,500 1937 76,850 9,200 1938 83,050 33,200 1939 132,900 66,450 These were not extermination camps, but conditions were very harsh and as can be seen from the table, inmates did die in them. ...read more.

A dozen 'ringleaders' of this movement were hanged in Cologne in November 1944. However, such opposition as existed remained isolated and confined to grumblings about material conditions. By far the most serious threat was the attempt to remove Hitler by the July Bomb Plot of 1944. A group of leading army officers tried unsuccessfully to assassinate Hitler. As a result over 5,000 were killed in retaliation. v) Conclusion Overall Nazi control was pretty effective. However, it must be remembered that nearly half the electorate had voted Hitler in - i.e. he was in fact a popular leader. In addition, his success in solving Germany's economic problems and his remarkable achievements in foreign policy must have meant that by 1940 his approval rating was probably sky high. Moreover, with the onset of war any opposition to the regime could justifiably be portrayed as unpatriotic and treasonous. In fact the Nazis remained pretty much in control until the collapse of the regime in May 1945. LIFE IN NAZI GERMANY i) The Economy There is no doubt that Hitler was able to solve the problem of unemployment: UNEMPLOYMENT January 1933 6,014,000 1934 3,773,000 1935 2,974,000 1936 2,520,000 1937 1,853,000 1938 1,052,000 1939 302,000 How was he able to do this? ...read more.

Women did not, however, serve in the armed forces. iv) Conclusion To sum up: for many, life in Nazi Germany was not too bad (up to about 1941/2). The economy recovered, there was full employment and there was a growing feeling of optimism. The youth policy did seem to have some success, producing a generation of young people devoted to Hitler; and the number of live births increased from 971,174 in 1933 to 1,413,320 in 1939 which suggests that the marriage policy was working (though ironically more women were working in 1939 - 12.7 million- than in 1933 - 11.5). Because we know that this was an evil regime and because we know what followed - war and genocide - it is often difficult to appreciate that Hitler was popular and that life for the majority was probably not unpleasant - until 1941/2 at any rate. As one commentator has put it: With all the success Hitler had, Germany was actually a wonderful place to be alive, unless you were Jewish, you had strong political convictions either as a socialist or a communist, or you believed in individuality and the freedom of the individual; but that is never the majority of the people. ...read more.