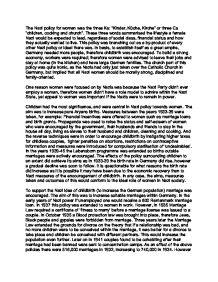 The Nazi policy for women was the three Ks: "Kinder, K�che, Kirche" or three Cs "children, cooking and church". These three words summarised the lifestyle a female Nazi would be expected to lead, regardless of social class, financial status and how they actually wanted to live. This policy was branching out as a by-product of every other Nazi policy or ideal there was. In basis, to establish itself as a great empire, Germany needed more people, therefore childbirth was encouraged. To build a strong economy, workers were required; therefore women were advised to leave their jobs and stay at home (in the kitchen) and have large German families. The church part of this policy was quite ironic, as the Nazis had only just taken over the Catholic Church in Germany, but implied that all Nazi women should be morally strong, disciplined and family-oriented. One reason women were focused on by Nazis was because the Nazi Party didn't ever employ a woman, therefore women didn't have a role model to admire within the Nazi State, yet appeal to women was important if the Nazis were to remain in power. Children had the most significance, and were central in Nazi policy towards women. The aim was to increase pure Aryans births. ...read more.

Later on in 1941 couples found to be cohabiting after their marriage had been banned were sent to concentration camps. As an effect of the above policies there were 516,000 marriages in 1932, increasing to 740,000 in 1934. However after 1938 divorces increased as in the same year the Marriage Laws had extended the grounds for divorce. Similar to the increase in childbirths, marriages might have been due to economic optimism than to government policies and divorce was extended to help national objectives. This encouraged women to become housewives and fulfill the role of women in Nazi ideology. Several other varying policies were brought in to supplement the lifestyle of Nazi women. These included the welfare of German citizens. As mothers, women were expected to the contribution to the development of healthy Germans. The actions taken in response to this were further legislation. The National Socialist Welfae Organisation was set up which was mainly staffed by women, giving them jobs, as well as the completion of the vast expansion of health offices (especially in rural areas) as well as improved sanitation, preventative medicine and genetic and racial care. In 1939-45 childcare facilities were improved especially for working mothers. This was due to the return of women back to work in wartime. ...read more.

A Nazi woman's public life was as equally important as her private. The aim of Nazi policy in this incidence was to organise women and incorporate them into the Volksgemeinschaft. The actions taken to implement this aim were that unsurprisingly, no female members of the Reichstag were permitted and two women's organisations were established to make them feel that they held some real value within the political and social structure of the Nazi lifestyle. During the war years, these organisations contributed to the war effort for example, clothes collections were made by the women to go to the Russian Front. The aims and measures in this case did show signs of success as there was an increased female participation in Nazi bodies, which gave the middle class women the opportunity to be involved in public life although the task of decision-making could only be designated to men to fulfill each role Nazi ideology offered to the separate genders. My overall conclusion is that Nazi policies towards women were used solely as propaganda material to gain votes, and that women weren't as near as highly regarded as men within any part of Nazi Germany, whatever role they were brainwashed into having in order to fulfill Nazi ideology of a strong German empire with a very large pure-blood population and strong economic and political power. This is because many of the Nazi policies towards women changed and contradicted themselves over a short space of time. ...read more.