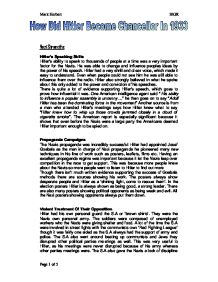 Nazi Strengths Hitler's Speaking Skills Hitler's ability to speak to thousands of people at a time was a very important factor for the Nazis. He was able to change and influence peoples ideas by the power of his speech. Hitler had a very shrill and clear voice, which made it easy to understand. Even when people could not see him he was still able to influence them over the radio. Hitler also strongly believed in what he spoke about this only added to the power and conviction of his speeches. There is quite a lot of evidence supporting Hitler's speech, which goes to prove how influential it was. One American intelligence agent said "His ability to influence a popular assembly is uncanny..." he then goes on to say "Adolf Hitler has been the dominating force in the movement" Another source is from a man who attended Hitler's meetings says how Hitler knew what to say "Hitler knew how to whip up those crowds jammed closely in a cloud of cigarette smoke". The American report is especially significant because it shows that even before the Nazis were a large party the Americans deemed Hitler important enough to be spied on. ...read more.

he wrote "It WILL be necessary to pursue a new policy" He also said at his trial "I feel myself to be the best of the Germans who wanted the best of the German people" by this he means that though there were many Germans who wanted to succeed he felt that he was the only one that could do it. Support From Big Business The Nazis early on received financial support from many big companies and organizations that were keen for Hitler and his party to gain power. They supported Hitler because the Nazis were an extreme right wing party that believed in keeping strong businesses strong. Whereas their opposition the Communists were extreme left wing and if they gained power all the wealth of the companies would be spread out among the people. This helped Hitler because it gave him funding to produce propaganda and to hold rallies all this gave Hitler a huge advantage over his opposition as he could do things and reach people that the other parties couldn't Through the texts I have read I cannot find any evidence supporting the financial help from businesses. ...read more.

Hitler stood up and offered to be that leader this coupled with all the other 'factors' set him apart from his opposition all these major advantages over the enemies were a great asset on aiding him to power Summary Paragraph I think that there are 4 main reasons why Hitler rose to power the first was his own speaking skills because without those he never would have been able to make millions of people listen to and believe him. The second is the Nazis propaganda campaigns, these were important because it made more people go and see the Nazis so Hitler himself could turn there minds. The third reason is the oppositions failure to co-operate because if they had the Nazis and Hitler would most likely been stopped in their tracks rendering all their other assets useless. The fourth and final reason is the impact of the depression, if it had never taken place people never would have had wanted to listen to Hitler's extremist views. None of the above reasons would work on their own and each in turn needs the others. So in conclusion Hitler's rise to power was not based on one trait it was based on many, which built up to a very powerful combination indeed. ?? ?? ?? ?? Mark Herbert 10GR Page 1 of 3 ...read more.