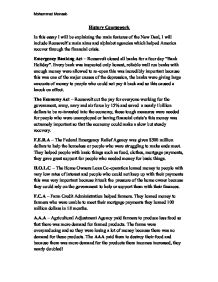 In this essay I will be explaining the main features of the New Deal, I will include Roosevelt’s main aims and alphabet agencies which helped America recover through the financial crisis.

Emergency Banking Act – Roosevelt closed all banks for a four day “Bank Holiday”. Every bank was inspected only honest, reliable well run banks with enough money were allowed to re-open this was incredibly important because this was one of the major causes of the depression, the banks were giving large amounts of money to people who could not pay it back and so this caused a knock on effect.

The Economy Act – Roosevelt cut the pay for everyone working for the government, army, navy and air force by 15% and saved a nearly 1billion dollars to be re-invested into the economy, these tough measures were needed for people who were unemployed or having financial crisis’s this money was extremely important so that the economy could make a slow but steady recovery.

F.E.R.A – The Federal Emergency Relief Agency was given $500 million dollars to help the homeless or people who were struggling to make ends meet. They helped people with basic things such as food, clothes, mortgage payments, they gave great support for people who needed money for basic things.

H.O.L.C – The Home Owners Loan Co-operation loaned money to people with very low rates of interest and people who could not keep up with their payments this was very important because it took the pressure of the home owner because they could rely on the government to help or support them with their finances.

F.C.A – Farm Credit Administration helped farmers. They loaned money to farmers who were unable to meet their mortgage payments they loaned 100 million dollars in 18 months.

In conclusion Roosevelt was helping America’s economy unlike Hoover his aims of helping the economy were succeeding and the public began to lie him.