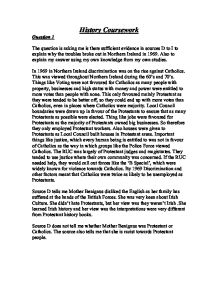 History Coursework Question 1 The question is asking me is there sufficient evidence in sources D to I to explain why the troubles broke out in Northern Ireland in 1969. Also to explain my answer using my own knowledge from my own studies. In 1969 in Northern Ireland discrimination was on the rise against Catholics. This was viewed throughout Northern Ireland during the 60's and 70's. Things like Voting were not favoured for Catholics as many people with property, businesses and high status with money and power were entitled to more votes than people with none. This only favoured mainly Protestant as they were tended to be better off, so they could end up with more votes than Catholics, even in places where Catholics were majority. Local Council boundaries were drawn up in favour of the Protestants to ensure that as many Protestants as possible were elected. Thing like jobs were favoured for Protestants as the majority of Protestants owned big businesses. So therefore they only employed Protestant workers. Also houses were given to Protestants as Local Council built houses in Protestant areas. Important things like justice, which every human being is entitled to was not in favour of Catholics as the way in which groups like the Police Force viewed Catholics. ...read more.

To make source H more useful I need the reasons as to why the RUC officer attacked the civil rights marcher. The links I could make from sources D-H is that the violence is escalating against marchers marching for civil rights. Source I is showing crowd violence as loyalists ambush civil rights marchers at Burntolett in January 1969. The source is not telling me why loyalist ambushed civil rights marchers in 1969. To make source I more useful I need facts on whether there were any civil right marchers injured and killed. I think there is enough evidence with the question of why troubles broke out in Northern Ireland in 1969. Trouble broke out in Northern Ireland in 1969, due to lack of civil right and justice. But also the lack of respect given to the Catholics. Also this resulted in more attacks on civil right marchers. Question 2 The question is asking why events such as 'Bloody Sunday' produced such different historical interpretations and to also refer to sources A-C and any other interpretations of the events from your studies to help you in your answer. In 1972 student marchers were attacked by a violent mob while police stood by. During the riots in the Derry Bogside, Catholics put up barricades tom protect themselves and the RUC forcibly removed them later. ...read more.

The link I could make between the sources is that further inquiries have been taken out due to whether or not those killed were handling firearms. Source C is telling me that Daniel Porter a witness has told the Bloody Sunday inquiry into the death of 13 men in Londonderry that he heard soldiers talk about clearing the 'Bog' by which he linked it to the military operation in Derry's Bogside on January 30 1972, when 13 men were shot. The source does not tell which soldiers he heard about clearing the 'Bog' and if any of the soldiers admitted to talking about the operation. To make source C more useful to me I would need accounts from other eye witnesses. The links I can make between sources A-C is that the debate has now been further taken as an eye witness has stepped forward. I think there is enough evidence in the question because most of the evidence from inquiries that were taken out was misleading and incorrect. Also the suspicions of whether the 13 men killed were handling firearms or not have now been slightly decreased due to some successful test and investigations. Events like Bloody Sunday produced different historical interpretations because of the events that led up to Bloody Sunday. For e.g. civil right marches. Also because of Catholics being on suspicion to have handled firearms. ...read more.