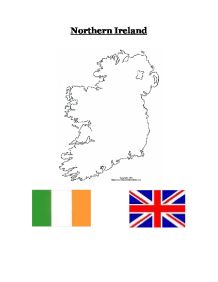 Northern Ireland Britain first got involved in Ireland because, it was believed that it was an excellent military stronghold for the Catholic enemies of Britain (France and Spain). So the British monarchy invaded and encouraged the loyal Protestants from England and Scotland to settle there. "Plantations" were set up by these Protestants. They were given the best land and all the important jobs in Government. Catholics were forced to work on these "Plantations" because they could not get a job anywhere else. These events were the main catalysts in the rebellions that followed. Beliefs of the Republican/Nationalists The Republicans/Nationalists are from Southern Ireland, or Eire. Most of the people that live here are Catholics and most of these want to see all of Ireland reunited again as one country. Also, there are a lot of Catholic people living in the North that also want Ireland to reunite so that the fighting and bloodshed stops. Small terror groups had been set up to rebel against the British. A small minority of Catholics joined the IRA (Irish Republican Army), and until very recently have been prepared to use violence and terror to force the British out of Northern Ireland and reunite the country. Political parties like Sinn Fein and the Social Democratic and Labour Party (SDLP) back the Nationalists. Southern Ireland first gained its independence from Britain in 1921, when the Isle was partitioned into two. The North remained part of Britain, whereas the South became a separate, independent country. There flag is different to the Union Jack. It has three colours which are Green, White and Orange. People often give the stereotype to Republicans as all terrorists, but this is completely untrue as it is only a small minority of Catholics and extreme Nationalists that choose to use violence to show their opinion. Beliefs of Loyalists/Unionists Like Scotland and Wales, Northern Ireland is part of the UK. ...read more.

The British government-appointed Widgery Tribunal found the soldiers were not guilty of shooting dead the 13 civilians in cold blood. The march was a protest march by the Catholics against internment without trial. They were halted when they approached the army barricade. The march was illegal because the Stormont Parliament had banned such protests and they were made to stop. Protestors threw stones at the regiment. At first the regiment only retaliated with rubber bullets and water cannons, but this did not dampen the spirits of the protestors who continued to throw stones. Eventually the regiment was at the end of their tether with them. They opened rounds of bullets on them and killed 13 supposedly innocent protestors. This was seen as cold blooded killing as the protestors were not armoured nor had any protection. They were innocent of any crime as there was no proof that they were actually throwing stones. The actual events that followed after the first attacks on the soldiers are not clear. The soldiers say they were fired upon from the Rossville flats as they moved in to make arrests and that they returned fire. The Catholic community says soldiers on the ground and army snipers on the city walls above the Bog side shot unarmed civilians. Protestants back in Britain and in Northern Ireland felt that the killings were not cold blooded, as they were done in self defence from the shower of stones that were reigning down on them. It also concluded the soldiers had been fired upon first and some of the victims had handled weapons. They felt that what the Catholics were doing was illegal and needed to be stopped. They accepted the fact that killing someone was also a crime, but they supposedly knew that it was an act of self defence. Another argument for the Army regiment was that they tried to halt the proceedings peacefully then when the protestors started attacking them with stones, the used rubber bullets and water cannons to ...read more.

Another event is the potato famine, where many Catholics died due to British ignorance and Protestant greediness. Another one is the Easter Rising of 1916, where Catholic extremists stormed the General Post Office and declared Ireland was a free state. However minutes later they were arrested and the 15 leaders of this movement were executed and died as martyrs. The Protestants and the British took such drastic action because they were extremely annoyed at the Nationalists for not fighting in WWI with them, and instead spreading violence and bloodshed behind there backs trying to liberate Ireland. Also the passing of the Home Rule bills is another key event. The House of Lords had declined Home Rule for Ireland two times before finally agreeing to let Ireland have Home Rule. But as this Bill was passing through the House of Commons, WWI struck out, and the minds of the British were elsewhere. However, the Irish liberators were not going to wait for the war to finish, so they took the law into their own hands and started the Easter Rising of 1916. Overall I think that both parties are equally to blame for violence and terror that has happened around Northern Ireland. It has not been a recent occurrence either, it has been a long drawn out haul of disagreement after disagreement which could have topped a long time ago if both sides were not so stubborn and did what was actually best for their people rather what was not good for the opposition. Also, I think it is important that the children growing up near and around Northern Ireland live a happy life not full of violence and are given positive role models to aspire to rather than that of the IRA and the UDF. Sadly, I cannot see this happening anytime in the near future but hopefully, over time, both sides learn to live and co-exist alongside one another peacefully. ...read more.