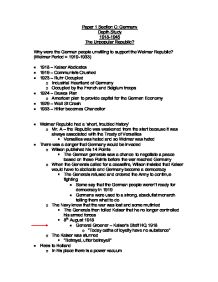 Paper 1 Section C: Germany Depth Study 1918-1945 The Unpopular Republic? Why were the German people unwilling to support the Weimar Republic? (Weimar Period = 1919-1933) * 1918 - Kaiser Abdicates * 1919 - Communists Crushed * 1923 - Ruhr Occupied o Industrial Heartland of Germany o Occupied by the French and Belgium troops * 1924 - Dawes Plan o American plan to provide capital for the German Economy * 1929 - Wall St Crash * 1933 - Hitler becomes Chancellor * Weimar Republic had a 'short, troubled history' o Mr. A - the Republic was weakened from the start because it was always associated with the Treaty of Versailles * Versailles was hated and so Weimar was hated * There was a danger that Germany would be invaded o Wilson published his 14 Points * The German generals saw a chance to negotiate a peace based on these Points before the war reached Germany o When the Generals called for a ceasefire, Wilson insisted that Keiser would have to abdicate and Germany become a democracy * The Generals refused and ordered the Army to continue fighting * Some say that the German people weren't ready for democracy in 1919 * Germans were used to a strong, absolutist monarch telling them what to do o The Navy knew that the war was lost and some ...read more.

people were starving * link between politics and social * 1923 - Germany missed a payment and French and Belgium troops occupied the Ruhr o They were going to take what was owed in the form of goods * However, Ebert ordered a strike and the workers willingly agreed in a form of passive resistance o "An unjust occupation" o Albert Leo Schlageter (he represents the violent response to the invasion) * Army Volunteer and a Lieutenant during the First World War * Could not come to terms with the e * Member of the Frei Korps o And an early member of the Nazi Party (NSDAP) * He organised acts of sabotage agenised * Caught and sentenced to death after attacking a railway line * He is later remembered as a mater for the Nazi Party * The French and Belgium troops retaliated and dealt with the workers ruthlessly o 100 people were executed o 100,000 people exiled * The strike had a damaging effect on Germany o The Ruhr is the industrial heart-land of Germany * To counter the industrial slowdown, Ebert printed more money o This money wasn't backed by gold or silver bullion o However, this caused Hyper-Inflation * No inflation in 1929 * In 1924 a Billion Mark note was issued and even this couldn't get a loaf of bread * ...read more.

Commercial aviation then concentrated exclusively on the building fleets of aircraft which were able to transport passengers more quickly and cheaply and in greater safety. o On may 6th 1937 the Hindenburg exploded as it approached it mooring at Lakehurst, New Jersey * The 245 meters had just completed its 11th transatlantic crossing * A small explosion and fire occurred at 7:21 pm followed by a second stunning explosion * Flames burst through the end of the ship * In less than a minute the entire airship collapsed to the ground engulfed in flames * 96 of the 97 people onboard were killed * For several years, zeppelins like the Hindenburg had seemed to be the transportation of the future * The giant German flying boat the Dornier D0-X arrived in New York on the 6th September 1931, carrying 60 passengers and landed in New York harbour after flying over the city o The plane had left Lake Constance in Germany nearly a year earlier. * The Dornier represented a triumph of German technology. o It was launched on the 13th July 1929, weighed 50 tonnes, was equipped with 12 engines and could accommodate 100 passengers on 3 decks. * It even had special sleeping cabins for guests. o The flying boat had a wing span of 157 ft. (48 meters) * It could reach a speed of 150 mph ...read more.