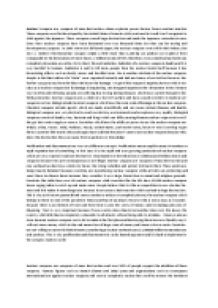 ﻿Nuclear Weapons are weapons of mass destruction whose explosive power derives from a nuclear reaction. These weapons were first developed by the United States of America (USA) and used in World War Two against in 1945 against the Japanese. These weapons caused huge destruction and made the Japanese surrender at once. Since then nuclear weapons have been detonated over two thousand times but that was for testing and development purposes. In 1945 when USA did bomb Japan, the nuclear weapons were still in their infancy but now A modern thermonuclear weapon weighs a little more than 1,100 kg can produce an explosive force comparable to the detonation of more than 1.2 million tonnes of TNT; therefore, even a small nuclear bomb can completely devastate an entire city by blast, fire and radiation. Radiation of a nuclear weapon is deadly and it is very harmful to humans. Radiation is said to kill more people than the nuclear bomb itself because it has devastating effects such as death, cancer and horrible burns. Fire is another attribute of the nuclear weapons. People in the blast radius of a ?Nuke? were vaporised instantly and had no chance of survival but however the further you got away from the blast the lesser the damage. A type of this weapon is napalm; however this is not class as a Nuclear weapon but its damage is long lasting. USA dropped napalm on the Vietnamese in the Vietnam War in 1956 and still today people are suffering due to long lasting diseases which have carried through to the third generation. Nuclear weapons are a whole new level of warfare and have caused scientists to make newer weapons such as biological and chemical weapons which have the same scale of damage as the nuclear weapons. ...read more.

A prime example of an unstable country having these weapons is Pakistan because they are home to many terrorist organisations and one leak or an illegal trade could lead to destruction of life and humanity. Imagine a world in which terrorists could push one button and destroy a country for political aims and this is why nuclear weapons should be abolished. The world court has already made it illegal to use these weapons because it understands the destruction so why not disarm them? There are also many treaties such as the Nuclear Non-proliferation Treaty (NPT) which is there to stop countries from getting more nuclear bombs. Currently the NPT has 189 countries and parties which are members and agree to terms which mean they can?t make any more of these weapons and use them. Mass Proliferation has already begun in countries such as India and China who both aim to have over 20,000 warheads by 2020 which could lead to even more countries making bombs. This is a vicious cycle and hence people and activists want to break it and abolish / disarm the nuclear weapons once and for all as it helps the economy and it helps the world. Islam is a religion which is heavily stereotyped in the media because of a few extremists who make the faith look bad in the public eyes to achieve their political aims and to prove a point to the public. Little does the public know that the Quran teaches about peace and that Islam itself means peace. The common greeting between Muslims ?a salaam alaikum? means peace be upon you. Muslims believe that they should live in a world of justice and peace but they think that war sometimes war may be needed. ...read more.

Also they can stop full scale wars and can we trust all nations to disarm? But the negatives of the nuclear weapons completely outweigh the positives. This is because the entire world would be more secure if the planet were free of nuclear weapons as the imminent threat and sense of danger will be gone, nuclear weapons are illegal to use so why keep them?, they are morally reprehensible, Nuclear weapons have not yet prevented any wars, which is what they were supposed to do, they cost a lot and finally they would remove the chance of the world getting destroyed in seconds if disarmed. Another reasons why nuclear weapons are a hazard and are bad because they are dangerous in the wrong hand i.e. terrorists. If terrorists get hold of them then the world could be in great danger. I also agree with the religious beliefs of Islam and Christianity of the sanctity of life because I am very grateful to God for my life and therefore I am completely against the killing of the innocent to achieve political aims or for resources. I am also quite against the general idea of war because I am a conscientious objector and war just has little positives. Circumstances in which I think that war should be allowed are similar to those of Christianity and Islam because I believe that war has to have conditions otherwise there will be utter chaos. I think war must be justified, it should definitely not harm any innocent people or animals, it should be a last resort and it should stop as soon as the tumult finishes because this way war can?t be accidental and not long-lasting either meaning peace can be restored and maintained with ease. ...read more.