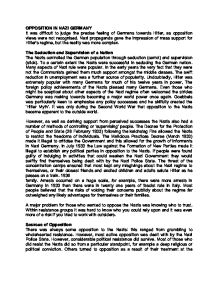 OPPOSITION IN NAZI GERMANY It was difficult to judge the precise feeling of Germans towards Hitler, as opposition views were not recognised. Nazi propaganda gave the impression of mass support for Hitler's regime, but the reality was more complex. The Seduction and Supervision of a Nation The Nazis controlled the German population through seduction (carrot) and supervision (stick). To a certain extent the Nazis were successful in seducing the German nation. Many aspects of Nazi rule were popular. In the early years the very fact that they were not the Communists gained them much support amongst the middle classes. The swift reduction in unemployment was a further source of popularity. Undoubtedly, Hitler was extremely popular with many Germans for much of his twelve years in power, The foreign policy achievements of the Nazis pleased many Germans. Even those who might be sceptical about other aspects of the Nazi regime often welcomed the strides Germany was making towards becoming a major world power once again. Goebbels was particularly keen to emphasise any policy successes and he skilfully created the 'Hitler Myth'. It was only during the Second World War that opposition to the Nazis became apparent to the outside world. ...read more.

The main threats to the Nazis came from the following: The Left: Communists and Social Democrats remained resolutely opposed to the Nazis, but many of their number were sent to concentration camps. A mutual suspicion and a failure, in the main, to work together did not help their cause. Young People: About one million young people failed to join the Nazi youth movements. Counter culture groups like the Edeiweiss Pirates and Swing Youth developed. The number of anti-Nazi groups increased during the war years. One such example was the White Rose group based at Munich University who distributed anti-Nazi leaflets and were eventually arrested and murdered in 1944. Intellectuals: Many intellectuals opposed the cultural barbarism of the Nazis and many were forced to emigrate and express their opposition from abroad. Famous emigrants included the playwright, Bertolt Brecht and the physicist, Albert Einstein. Conservatives: Many lawyers, diplomats and landowners had disliked the Nazis from the start. Others, including a number in the military, at first supported Hitler's desire to create a stronger Germany; but came to oppose Nazi recklessness, their policies and perhaps most importantly their failures in the war. The most important of these groups was the Kreisau Circle who planned to restore a democratic government to Germany. ...read more.

Unlike in the occupied countries, resistance in Germany during the Second World War was often viewed as traitorous rather than patriotic and many moderate Germans often detested those who were involved. The Stauffenberg Bomb Plot (20 July 1944) By the summer of 1944 the German army was clearly in retreat. A group of army generals realised that Germany could not win the war. They plotted to kill Hitler and once he was dead they intended to make peace with the Allies. On 20 July 1944, Colonel von Stauffenberg, leader of the plotters, attended a meeting with twenty four other officers held by Hitler at his headquarters near Berlin. The intention was to kill Hitler with a time bomb that he had placed in his briefcase. Soon after the meeting began Stauffenberg made an excuse to leave and ten minutes later the bomb exploded in the crowded room. He then flew to Berlin where he announced that Hitler was dead and the army generals were taking power. However, Stauffenberg had spoken too soon. Despite causing enormous damage and killing four other men, Hitler was still alive. His hair was singed, and his hearing and clothing had been damaged, but he was not seriously injured. He quickly set about getting his revenge and the leading conspirators were murdered. ...read more.