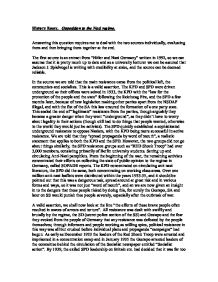 Opposition to the Nazi regime.

History Essay. Opposition to the Nazi regime. Answering this question requires me to deal with the two sources individually, evaluating them and then bringing them together at the end. The first source is an extract from "Hitler and Nazi Germany" written in 1992, so we can assume that it is pretty much up to date and as a university lecturer we can be assured that Jackson J. Spielvogel is writing with credibility at stake, and the source can be deemed reliable. In the source we are told that the main resistance came from the political left, the communists and socialists. This is a valid assertion. The KPD and SPD were driven underground as their offices were seized in 1933, the KPD with the "law for the protection of the people and the state" following the Reichstag Fire, and the SPD a few months later, because of new legislation making other parties apart from the NSDAP illegal, and with the fist of the SA this law ensured the formation of a one party state. This sealed the end of "legitimate" resistance from the parties, though arguably they became a greater danger when they went "underground", as they didn't have to worry about legality in their actions (though still had to do things that people wanted, otherwise to the world they would just be activists). The SPD quickly established a sophisticated underground resistance to oppose Nazism, with the KPD being more successful in active resistance. ...read more.

A closer analysis of the Communist groups operating in Germany into the early 1940's reveals a similar fate as the Gestapo hunted them down or they fell victim to denunciation by their fellow citizens. The Red Orchestra, a spy organisation for the USSR during the war, for instance is an example as they were defeated by the Nazi secret police and specialist forces. There are a number of points at issue with the information contained in the source extract. In the first instance I would like to reinforce that we are informed that the university lecturer is an American writing in "Hitler and Nazi Germany, 1992" and so academically reliable as we can assume lots of historical research took place for Jackson to come to this judgement. The source should ideally be read in its original context. The book the extract comes from could be merely a general survey of key developments or a collection of related articles. The view is held in line with much certainty as revised representations by western historians some of whom accept that Communists, Socialists and workers played a more active role in resisting the regime than previously thought. The author is correct in his/her view that the left, notably the Communists and Socialists were committed to resisting the regime. It should nevertheless be pointed out that Gestapo and SD action taken successfully against resistance outweighed the gains made by the extradited parties. Acts of resistance, in a survey, show a decline as the war of attrition by the Gestapo and the SD takes its toll. ...read more.

Yet, little headway was gained, and until the tide of the war turned against Germany most accepted Hitler. So only sporadic resistance was made, achieving little. In the latter war years, it became more powerful an element within the army, and climaxed with the only attempt on Hitler's life since his coming to power (1944, the Bomb Plot). Though a purge followed this, which crumbled most of the army's resistance in to dust. So the authors are correct in their views, "within the High Command there were those who considered Hitler an upstart", this is a valid interpretation of the facts, and as the Conservative Elites had vast resources of their own and were in a position of power within the Nazi structure, they were in a powerful position to offer resistance to the Nazi regime. Yet their greatest strength was their greatest downfall, because of their wealth, status and position in society, they had far more to risk losing than the average (probably) destitute Communist resistor, and would have less means to go against Hitler, it would take more courage from them. So, balancing the two sources up, we can see that the military were more likely the stronger force, but without the help of the others this group (and vice-versa, of course) would not have been encouraged if there was not other resistance going on somewhere, as there would be the feeling of loneliness, and of too great a risk. There are some circumstances where the two types overlap "the Red Orchestra" could be affiliated with the army and the KPD for instance. ...read more.