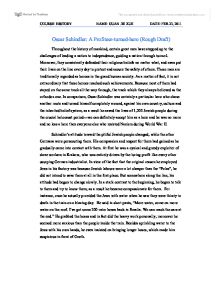 Oscar Schindler: A Profiteer-turned-hero (Rough Draft) Throughout the history of mankind, certain great men have stepped up to the challenges of leading a nation to independence, guiding a nation through turmoil. Moreover, they consistently defended their religious beliefs no matter what, and even put their lives on the line every day to protect and secure the safety of others. These men are traditionally regarded as heroes in the grand human society. As a matter of fact, it is not extraordinary that these heroes reached such achievements. Because most of them had stayed on the same track all the way through, the track which they always believed as the orthodox one. In comparison, Oscar Schindler was certainly a particular hero who chose another route and turned himself completely around, against his own country, culture and the inherited belief system, as a result he saved the lives of 1,200 Jewish people during the crucial holocaust period-we can definitely accept him as a hero and he was no more and no less a hero then everyone else who resisted Nazism during World War II. ...read more.

He said in short pants, "More water, come on more water on the roof. I've got some 200-mter hoses back in Emalia. We can reach the cars at the end." He grabbed the hoses and in fact did the heavy work personally; moreover he seemed more anxious than the people inside the train. Besides sprinkling water to the Jews with his own hands, he even insisted on bringing longer hoses, which made him suspicious in front of Goeth. Moreover Schindler's perspectives on the Nazi changed dramatically after he witnessed a German raid on the Jewish ghetto. He was aware that the brutality of the Nazis accelerated with murder, violence and terror when he saw innocent people were killed and packed in the trucks. He was almost shocked as he oversees the liquidation from the mountain. He firmly stated that, "Beyond this day, no thinking person could fail to see what would happen. ...read more.

But he still murmured before he fled, "This pin. Two people. This is gold. Two more people. He would have given me two for it, at least one. One more person. A person, Stern. For this." Even though he was in such horrible situation, in which he had to flee away, he still wanted to save more Jewish people. Today there are over 6,000 offspring of Schindler Jews live in Europe and the U.S.A. The name Schindler is now well known to billions of people as a household word for courage in a world of brutality. He was indeed a hero who was able to stop on the brink of a precipice and turn back from the wrong path. It is more surprising and takes more energy for someone to defy their own beliefs and to turn themselves around than to stay true to what they always believed. ?? ?? ?? ?? COURSE: HISTORY NAME: GUAN JIE XUE DATE: FEB.23, 2011 ...read more.