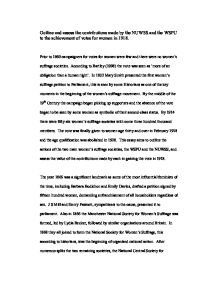 Outline and assess the contributions made by the NUWSS and the WSPU to the achievement of votes for women in 1918.

Outline and assess the contributions made by the NUWSS and the WSPU to the achievement of votes for women in 1918. Prior to 1860 campaigners for votes for women were few and there were no women's suffrage societies. According to Bartley (1998) the vote was seen as 'more of an obligation than a human right'. In 1832 Mary Smith presented the first women's suffrage petition to Parliament, this is seen by some Historians as one of the key moments in the beginning of the women's suffrage movement. By the middle of the 19th Century the campaign began picking up supporters and the absence of the vote began to be seen by some women as symbolic of their second-class status. By 1914 there were fifty-six women's suffrage societies with some three hundred thousand members. The vote was finally given to women age thirty and over in February 1918 and the age qualification was abolished in 1928. This essay aims to outline the actions of the two main women's suffrage societies, the WSPU and the NUWSS, and assess the value of the contributions made by each in gaining the vote in 1918. The year 1866 was a significant landmark as some of the most influential feminists of the time, including Barbara Bodichon and Emily Davies, drafted a petition signed by fifteen hundred women, demanding enfranchisement of all householders regardless of sex. ...read more.

Many Historians have criticised the structure, Bartley (1998) writes of two in particular. George Dangerfield believes that the WSPU was a dictatorial organisation, under the dual tyranny of Emmiline Pankhurst and her daughter Christabel, whilst Ray Strachey said that the WSPU entrusted all decisions to the leaders whilst the members happily obeyed orders. The WSPU saw many splits, due mainly to the Pankhurst's dismissing those who sought to disagree with their control. The WSPU did not start as a militant organisation, their methods were at first peaceful. In 1905 Emmiline and Christabel Pankhurst went with Annie Kenney to hear Sir Edward Grey of the Liberal Party, who were expected to win the upcoming election, speak in Manchester. They wanted to ask him if the Liberal Party supported votes for women. Annie Kenney shouted the question from her seat during the speech, and the resulting brawl between the women and the rest of the crowd led to them being dragged out of the building, the younger two were arrested. They were given a choice in court of a fine or a jail sentence, both chose the jail sentence and the term 'votes for women' made headline news. In 1906 the Daily Mail coined the term 'suffragette' and the name stuck. ...read more.

I feel that the actions of the two organisations combined, (along with a number of other organisations such as the East London Federation of Suffragettes, who fought for women's rights throughout the war), were instrumental in getting the vote for women. There have bee written many different versions of the truth. There are for instance a number of different accounts of the death of Emily Davison under the hooves of the Kings' horse in 1913. Bartley (1998) argues that Emily Davison died accidentally, whilst Raeburn (1976) writes that Emily Davison had 'believed that one martyr could save the cause', and that she had tried to take her own life in 'dramatic circumstances numerous times before when suffragette affairs were critical'. She also writes that Miss Davison had 'achieved her aim when she met her death on the Epsom Racecourse' (Pg 63). From the evidence and written accounts I have come across, I come to the conclusion that the suffrage campaign fought by the WSPU and the NUWSS played a large part in winning the vote, but the massive effort of women as a whole during the war was what ultimately won them the vote. I also believe that the vote would have been given to women without the suffrage campaign, or the war effort, later perhaps than it was given, due to changes in attitudes and the evolution of the human race. ...read more.