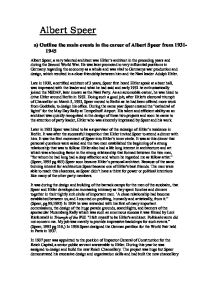 Albert Speer a) Outline the main events in the career of Albert Speer from 1931-1945 Albert Speer, a very talented architect was Hitler's architect in the preceding years and during the Second World War. He was later promoted to very influential positions in Germany regarding the economy as a whole and was vital to Germanys war production and design, which resulted in a close friendship between him and the Nazi leader Adolph Hitler. Late in 1930, a certified architect of 3 years, Speer first heard Hitler speak at a beer hall, was impressed with the leader and what he had said and early 1931 he enthusiastically joined the NSDAP, later known as the Nazi Party. As an automobile owner, he was hired to drive Hitler around Berlin in 1932. Doing such a good job, after Hitler's electoral triumph of Chancellor on March 5, 1933, Speer moved to Berlin as he had been offered more work from Goebbels, to design his office. During the same year Speer created the "cathedral of lights" for the May Day Rally at Tempelhoff Airport. ...read more.

"I felt myself to be Hitler's architect. Political events did not concern me. My job was merely to provide impressive backdrops for such events." (Speer, 1995 pg 116,) In 1936 Speer designed the German pavilion for the World Fair held in Paris in 1937. In 1937 peer was appointed to the position of Inspector General of Construction for the Reich Capital, a senior public servant answerable to Hitler. During this year he was assigned to design and build the new Reich Chancellery. The project was huge but Speer demonstrated his excessive design and organization skills and had built the new chancellery on deadline and in magnificence, and again impressed Hitler greatly. In the same year Speer moved his family to Obersalzburg, the alpine retreat village in which Hitler and members of his inner circle lived. He visited Hitler once or twice a week for dinner and was increasingly deserting his family for the service of Hitler. In 1938, he was awarded the Nazi Golden Party Badge of Honour. Speer continued to design for Hitler up until 1942, During this time Speer proved that he was not only a talented architect but also a ...read more.

Speer worked against Hitler's 'Scorched-earth policy', which aimed to destroy the German people, drag the entire country into the inferno with him. Speer decided to murder Hitler, poison him through the air conditioning, but later changed his mind. "Speer hoped to wipe out the entire Nazi leadership of the Third Reich as well as the high Command."(Shirer, 1987, pg 278) On April 23 Speer had come to say farewell to the leader and to confess to him that his public duty called on him to make a decision despite personal relationships, and forced him to sabotage the Fuhrers scorched earth policy. Speer did what he could to save bridges, factories and other installations vital to survival In 1945 Speer was captured by American troops and was sentenced to 20 years imprisonment for his war crimes during the Second World War, and lived as a writer until 1981. During the years 1932-45 Speer proved to be a very talented man in design and organization, resulting in a strong relationship with Hitler, amazing improvements in Germanys production until was forced to desert his friendship for his personal morals. Speer proved to be one of the most important and influential men on Hitler, the German war effort and the economy as a whole. ...read more.