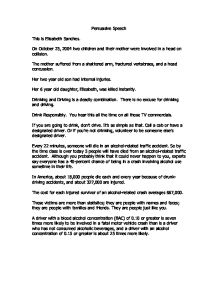 Persuasive Speech This is Elisabeth Sanches. On October 23, 2004 two children and their mother were involved in a head on collision. The mother suffered from a shattered arm, fractured vertabraes, and a head concussion. Her two year old son had internal injuries. Her 6 year old daughter, Elisabeth, was killed instantly. Drinking and Driving is a deadly combination. There is no excuse for drinking and driving. Drink Responsibly. You hear this all the time on all those TV commercials. If you are going to drink, don't drive. It's as simple as that. Call a cab or have a designated driver. Or if you're not drinking, volunteer to be someone else's designated driver. ...read more.

The cost for each injured survivor of an alcohol-related crash averages $67,000. These victims are more than statistics; they are people with names and faces; they are people with families and friends. They are people just like you. A driver with a blood alcohol concentration (BAC) of 0.10 or greater is seven times more likely to be involved in a fatal motor vehicle crash than is a driver who has not consumed alcoholic beverages, and a driver with an alcohol concentration of 0.15 or greater is about 25 times more likely. Texas leads the nation in alcohol-related traffic fatalities. And like other states, the Texas Department of Transportation has looked for better ways to get out the familiar life-saving message: don't drink and drive. ...read more.

Two others in the car were killed, and Saburido, a native of Venezuela, has made a painful recovery. The ad campaign pulls no punches -- her scarred, disfigured face is featured prominently in posters. The television spots are even more emotional: it begins by focusing on a black-and-white photo of an attractive young woman, while an unseen narrator describes the night Saburido's car was hit. Then Saburido lowers the photograph to reveal her own face. "This is me after being hit by a drunk driver," she says in the ad. I hope the message was clear today. DON'T DRINK & DRIVE!!! Like I said before, if you are going to drink, get a cab or have a designated driver. Or better yet volunteer to be someone else's designated driver because friends don't let friends drive drunk. ...read more.