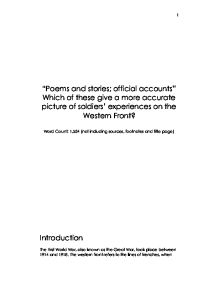 Poems and stories; official accounts Which of these give a more accurate picture of soldiers experiences on the Western Front?

"Poems and stories; official accounts" Which of these give a more accurate picture of soldiers' experiences on the Western Front? Word Count: 1,534 (not including sources, footnotes and title page) Introduction The First World War, also known as the Great War, took place between 1914 and 1918. The western front refers to the lines of trenches, when Britain was in battle against enemies. Poems were written in large quantities during this World War, mainly by military personnel but also by some non-combatants. Stories during this period were mainly memoirs or autobiographies of soldiers. Official accounts were reports produced by the government by high ranking military officials. These were normally published in national newspapers but sometimes were also used in diaries and official war art. I would expect to find that stories are the most accurate accounts for the experiences of soldiers on the Western Front. Poems The first of the two poems I have chosen is, 'Dulce et Decorum Est', by Wilfred Owen. This poem was written in 1917, by Owen which makes it a very appropriate choice as he was a soldier in World War One, who had experienced the Great War from the frontline, in which he fought with the Manchester Regiment as a second lieutenant. ...read more.

The book was published in January 1929, in which it sold 2.5 million copies in the first eighteen months of print. I believe that stories should be used by historians, as they give first person accounts of what happened by people who were there. My second choice is an extract from, 'Memoirs of an Infantry Officer', by Siegfried Sassoon. The author of this book, Sassoon, assigned to the Royal Welch Fusiliers2, thought in the war in which he had lost his brother. After a number of encounters with the Germans on the Western Front, the military authorities decided he was unfit to fight and was sent to Craiglockhart Hospital, where he met Wilfred Owen. The book, first published in 1930, gives accounts of Sassoon's life in WWI and shortly after he retired from service. Sassoon fought on the Front from spring 1916 to the summer of 1917. The above extract refers to a personal experience of War by Sassoon, makes a number of references to gas. This shows that gas was a very threatening method of causing both physical and mental distress to soldiers on the Western Front. It also explains other trench problems such as trench-foot and trench-mouth diseases, and how it was very difficult to accommodate yourself in the trenches because of the poor design and the weather conditions. ...read more.

Firstly, I believe this because most stories of this period were written by soldiers, who had experienced war in their lives considerably and been inspired to write, after or during battle, normally to create a very effective anti-war view. The two other types of sources also give an accurate picture but are less reliable than stories, in my opinion, because they lack the detail which can express the feelings of the soldiers and details of the situation. Secondly, all stories seem to tell more than any other source and can help a historian understand the horrors of gas usage in the war, which caused so many proud soldiers to perish. The least helpful sources would have to be official accounts. I find this because they only seem to give a synopsis of a battle or incident and do not seem to express the experiences of the average soldier on the front. Poetry sources gave an accurate account of soldiers' experiences of gas, however, were too brief and are not factual enough to give accurate impressions of the soldier's experiences of gas. 1 He fought for a short period due to a wound caused by shrapnel in the right arm, leg and neck. 2 The Royal Welch Fusiliers were a regiment of the British Army under the Prince of Wales' Division. ?? ?? ?? ?? 1 ...read more.