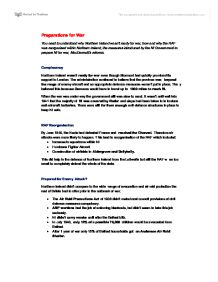 Preparations for War You need to understand why Northern Ireland wasn't ready for war, how and why the RAF was reorganised within Northern Ireland, the measures introduced by the NI Government to prepare NI for war, MacDermott's reforms. Complacency Northern Ireland wasn't ready for war even though Stormont had quickly promised its support to London. The administration continued to believe that the province was beyond the range of enemy aircraft and so appropriate defence measures weren't put in place. ...read more.

RAF Reorganisation By June 1940, the Nazis had defeated France and reached the Channel. Therefore air attacks were more likely to happen. This lead to reorganisation of the RAF which included: * Increase in squadrons within NI * Hurricane Fighter Aircraft * Construction of airfields in Aldergrove and Ballykelly. This did help in the defence of Northern Ireland from the Luftwaffe but still the RAF was too small to completely defend the whole of the state. ...read more.

* NI didn't carry masks until after the Belfast blitz. * In July 1940, only 10% of a possible 70,000 children would be evacuated from Belfast. * After 1 year of war only 15% of Belfast households got an Anderson Air Raid Shelter. MacDermott's Reforms In June 1940, he was made the Minister of Public Security. He organised: * Rapid increase of public air-raid shelters * Reinforcement of the emergency services * Efforts to evacuate children from Belfast However it was too late. In April and May 1941, the Luftwaffe bombed Belfast. They were still very much too poorly equipped to be ready for the attacks with their defences and many people died. ...read more.