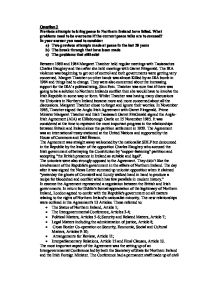 Previous attempts to bring peace in Northern Ireland have failed. What problems need to be overcome if the current peace talks are to succeed

Question 3 Previous attempts to bring peace in Northern Ireland have failed. What problems need to be overcome if the current peace talks are to succeed? In your answer you need to consider: a) Two previous attempts made at peace in the last 20 years b) The break through that have been made c) The problems that still exist Between 1980 and 1984 Margaret Thatcher held regular meetings with Taoiseaches Charles Haughey and then after she held meetings with Garret Fitzgerald. The IRA violence was beginning to get out of control and both governments were getting very concerned. Margret Thatcher on other hands was almost Killed by an IRA bomb in 1984 and things had to change. They were also concerned about the increasing support for the IRA's political wing, Sinn Fein. Thatcher was sure that if there was going to be a solution to Northern Irelands conflict then she would have to involve the Irish Republic in some way or form. Whilst Thatcher was having many discussions the Unionists in Northern Ireland became more and more concerned about all the discussions. Margaret Thatcher chose to forget and ignore their worries. In November 1985, Thatcher signed the Anglo Irish Agreement with Garret Fitzgerald. Prime Minister Margaret Thatcher and Irish Taoiseach Garret FitzGerald signed the Anglo-Irish Agreement (AIA) at Hillsborough Castle on 15 November 1985. ...read more.

The agreement failed to bring a complete end to political violence in Northern Ireland, nor did it reconcile the two communities. The devolved power-sharing government envisaged by the agreement never became a reality. However, it did improve cooperation between the British and Irish governments, which was key to the creation of the Belfast Agreement a decade later. At a strategic level the agreement demonstrated that the British recognised as legitimate the wishes of the Republic to have a direct interest in the affairs of Northern Ireland. It also demonstrated to unionists that they could not veto political progress as, in the end, the British state was stronger than them. Unlike the Sunningdale Agreement the Anglo-Irish Agreement withstood a much more concerted campaign of violence and intimidation, as well as political hostility, from the unionists. Republicans were left in the position of rejecting the only piece of constitutional progress (in the eyes of Catholics) since the downfall of Stormont a decade earlier. Combined with war weariness, military failures (as British intelligence penetrated the IRA) and the sense (under growing leftist influence within the republican movement) that a military conflict was sustainable but not sufficient, the agreement moved republicans towards what eventually became the politics of military cessation. The outcome was the Anglo-Irish Agreement of November 1985 that totally confused the Unionists and was only imposed on a reluctant Thatcher with great difficulty. ...read more.

The Secretary of State wanted to try and find a way of getting the talks going again and this was achieved in April 1992. However, these talks ended without agreement that November. Conclusion Peace, stability and understanding in Northern Ireland were the main objectives of the Agreement, although admittedly in the longer run, as both Governments expected an original increase in the level of paramilitary movement. In terms of merging the communities of Northern Ireland, the Anglo-Irish Agreement can only be judged as a failure. Catholics generally believe it has made little difference to their lives, while Protestants are very angry of its existence. Twelve years after the signing of the Anglo-Irish Agreement, the two main traditions in Northern Ireland are as affected as they have ever been. 1990 saw the then Secretary of State, Peter Brooke, quietly launch his plan to bring Northern Ireland's constitutional political parties to the negotiating table. Brooke's successor, Sir Patrick Mayhew, continued along similar lines. However, IRA ceasefire of August 1994 provided the movement for the general peace strategy that has dominated the political agenda of the mid-1990s. The Anglo-Irish Agreement as the structure to create a lasting political settlement has been put to one side.In 1993 O'Leary and McGarry argued that the Hillsborough Agreement merely created a new deadlock. Yet it remains together and provides the Irish Government with a contribution into the management of Northern Ireland, and provides a crucial channel of communication between both Governments. ...read more.