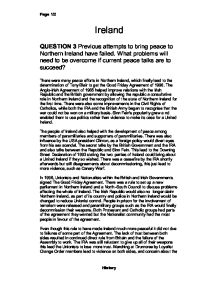 Previous attempts to bring peace to Northern Ireland have failed. What problems will need to be overcome if current peace talks are to succeed?

Ireland QUESTION 3 Previous attempts to bring peace to Northern Ireland have failed. What problems will need to be overcome if current peace talks are to succeed? There were many peace efforts in Northern Ireland, which finally lead to the determination of Tony Blair to get the Good Friday Agreement of 1998. The Anglo-Irish Agreement of 1985 helped improve relations with the Irish Republic and the British government by allowing the republic a consultative role in Northern Ireland and the recognition of the state of Northern Ireland for the first time. There were also some improvements in the Civil Rights of Catholics, while both the IRA and the British Army began to recognise that the war could not be won on a military basis. Sinn Fein's popularity grew and enabled them to use politics rather than violence to make its case for a United Ireland. ...read more.

People in prison for the involvement of terrorism were released and paramilitary groups such as the IRA would finally decommission their weapons. Both Protestant and Catholic groups had parts of the agreement they wanted but the Nationalist community had the most people in favour of the agreement. Even though this rule to have made Ireland much more peaceful it did not due to failures of some part of the Agreement. The lack of trust between both sides resulted in continued direct rule from Britain and the failure of the Assembly to work. The IRA was still reluctant to give up all of their weapons this lead the Unionists to lose more trust. Marching at Drumcree by Loyalist Orange Order members lead to violence on both sides, and concern about the freed terrorists. The RUC is still unpopular as it is thought to be biased to Protestants. ...read more.

Both the British Government and the Eire Government have worked together to try to bring both rival communities together, lately however recent electrons results have place Ian Paisleys Democratic Unionist Party in a stronger position. This is not so good as the DUP does not trust Sinn Fein or the IRA. To conclude if peace is to occur between the two groups both have got to start trusting each other and not to hold prejudice against what has happen before. Most Protestants at the moment are to angry with the Catholics and are worried if the Catholic Church gains control. Catholics to are angry with the protestant rebels and the years of them being treated like 2nd class citizens. Also actions of groups such as the IRA and its reluctance to give up weapons. Both governments are also good in theory but both have different views on the future of Ireland. If peace is to succeed in Ireland both are going to have to work together for a compromise. ?? ?? ?? ?? Page 1/2 History ...read more.