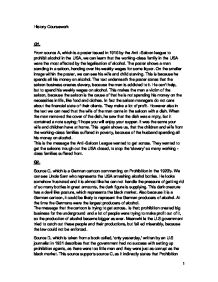 History Coursework Q1. From source A, which is a poster issued in 1910 by the Anti-Saloon league to prohibit alcohol in the USA, we can learn that the working-class family in the USA were the most affected by the legalisation of alcohol. The poster shows a man standing in a saloon, handing over his weekly wages for some liquor. On the smaller image within the poster, we can see his wife and child starving. This is because he spends all his money on alcohol. The text underneath the poster states that the saloon business creates slavery, because the man is addicted to it. He can't help, but to spend his weekly wages on alcohol. This makes the man a victim of the saloon, because the saloon is the cause of that he is not spending his money on the necessities in life, like food and clothes. In fact the saloon managers do not care about the financial state of their clients. They make a lot of profit. However also in the text we can read that the wife of the man came in the saloon with a dish. When the man removed the cover of the dish, he saw that the dish was empty, but it contained a note saying; 'I hope you will enjoy your supper. It was the same your wife and children have at home. This again shows us, that the children and wife from the working-class families suffered in poverty, because of the husband spending all his money on alcohol. This is the message the Anti-Saloon League wanted to get across. They wanted to get the saloons trough out the USA closed, to stop the 'slavery' so many working-class families suffered from. Q2. Source C, which is a German cartoon commenting on Prohibition in the 1920's. We can see Uncle Sam who represents the USA smashing alcohol bottles. He looks somehow frustrated and it is almost like he can not handle the pressure of getting rid of so many bottles in great amounts, the dark figure is supplying. ...read more.

The magazine makes him appear as a celebrity and not as a corrupt gangster, which he actually was. This source only gives us one sight view. It is not telling what kind of man Al Capone was. It may suggest that the magazine was supporting him and not the government. They turn a blind eye towards his criminal activities. People wanted what he provided and therefore did not see anything wrong with that. Also the caption underneath the photograph, paints a homely picture of him. However he was a gangster who murdered people and did illegal businesses. Therefore I feel this source is not completely reliable, because it paints an unrealistic picture of Al Capone. We can see on the photograph a relaxed and smiling looking man, however Al Capone was infamous for his bad temper. Therefore this source is to an extend reliable, as the magazine only creates one sight view of him. Source J, which is a quote from President Roosevelt announcing the repeal of the Eighteenth Amendment in 1933, saying; 'I think this would be a good time for a beer.' This was of course a joke he had made, but from what we can make up is that introducing Prohibition was an enormous fail, as alcohol productions became higher during that era and more speakeasies opened than saloons before Prohibition. It gives us a very clear impression that Prohibition was a bad law and it could not be enforced and even the president seemed to understand that. Sources F, I, and J are very helpful in order to understand public attitudes towards Prohibition, although each source has a limitation of reliability. However from the three sources I have studied, I can say that all the sources indicate that the public attitudes towards Prohibition were negative, they were all against it. A large amount of people still went to speakeasies and there were more speakeasies than there were saloons before Prohibition. ...read more.

On the 14th of February 1929, seven of the O'Banions (gang rivals of Al Capone) were sitting in a garage, waiting for a promised consignment of hijacked liquor. A car drove up to them, and three men dressed as police officers got out, followed by two others in normal clothes. The three supposed policemen entered the garage alone, disarmed the seven O'Banions and told them to stand in row against the wall. The O'Banions did as told, thinking that it was an inspection as any other they had in the past. However suddenly the two men who were dressed in normal clothes came and shot the seven O'Banions with a machine-gun. The three supposed policemen and the ones dressed in normal clothes drove off leaving the O'Banions dead. Al Capone however was not present at the event; he was at the time on a holiday to Florida, sending his men to do the dirty work. This had caused a huge damage to Al Capone's 'good' name, as people liked him for supplying alcohol. People looked past the fact that Al Capone was corrupt as any other gangster. This made him very unfavourable and therefore people started changing their attitudes towards him, leaving him as a public enemy number one. Although Al Capone was a gangster, he supplied what the public wanted; alcohol. He knew that Prohibition could not be enforced and saw big business in supplying alcohol. The public supported this, as they kept demanding more. This made him a powerful and a respectable man. However he still was handling corrupt and he was still acting against the law, so other people such as the Anti-Saloon league and the U.S government did see him as a threat, as he kept supplying alcohol illegally. Also after what happened at the Sint. Valentines Massacre, changed people onions about Al Capone and they might have seen him as a public enemy number one. In my conclusion I think that Al Capone was not public enemy number one, but he was not the public's favourite either. ?? ?? ?? ?? 1 ...read more.