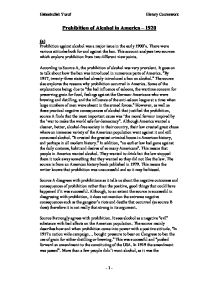 prohibition of alcohol in america

Prohibition of Alcohol in America - 1920 (a) Prohibition against alcohol was a major issue in the early 1900's. There were various attitudes both for and against the ban. This account analyses two sources which explore prohibition from two different viewpoints. According to Source A, the prohibition of alcohol was very prevalent. It goes on to talk about how the ban was introduced in numerous parts of America. "By 1917, twenty-three states had already introduced a ban on alcohol." The source also explores the reasons why prohibition occurred in America. Some of the explanations being; due to "the bad influence of saloons, the wartime concern for preserving grain for food, feelings against the German-Americans who were brewing and distilling, and the influence of the anti-saloon league at a time when large numbers of men were absent in the armed forces." However, as well as these practical negative consequences of alcohol that justified the prohibition, source A finds that the most important cause was 'the moral fervour inspired by the 'war to make the world safe for democracy". Although America wanted a cleaner, better, alcohol-free society in their country, their law created great chaos where an immense variety of the American population went against it and still consumed alcohol. "It created the greatest criminal boom in American history, and perhaps in all modern history." In addition, "no earlier law had gone against the daily customs, habit and desires of so many Americans". This means that people in America wanted alcohol. ...read more.

This suggests he is wealthy from selling alcohol. However, selling it to a poor man who ends up neglecting his family because of it portrays him of being greedy. In the background are men gambling. This adds to the negative image being presented. Although there is no such baddie in source D, the saloon and whoever runs it are prejudged as baddies anyway for keeping the father away from of the sad looking children outside. Again, such images in the picture present a negative depiction with the cause being alcohol. Source C uses words and phrases such as 'poor man', 'expensive' and 'slaves of the saloon'. This represents negative attitudes towards the 'expensive' addiction of alcohol for a 'poor man' who become 'slaves of the saloon'. Source D also states that the children are deprived of necessities like 'food' and 'shoes' because of their father spending all his 'weekly wages' on alcohol to feed his addiction. Again, the root of the addiction is the bad habit of alcohol consumption which further justifies the goodness of the prohibition. Conclusion Overall, both posters represent negative consequences of alcohol consumption through images that emotionally gets to humane people in society. However, these images can be criticised for scapegoating alcoholics being neglectful and for being biased and one-sided in order to win over views supporting the prohibition of alcohol. Artists of both sources are successful in producing posters in favour for the prohibition of alcohol. (C) (d) Source G shows us how many illegal stills and gallons on spirits were seized from 1921 to 1929. ...read more.

With wealthy businessmen like Rockefeller supporting prohibition it had a chance of working as they would not support a lost and doomed cause. Source G and H show us that prohibition failed and that crime rates increased due to drinking alcohol that was supplied by the gangsters. The sources are not reliable as they are just facts that show information like "illegal stills seized" and "drunk drivers". But it does not tell you about the illegal stills not seized and drunk drivers not caught. It is also from the police department in 1920 - 1925 so they may have made the numbers up to push prohibition harder. It is only one side of the story. Source I shows us that prohibition officers were bribed left, right and centre. This means that prohibition will never work as no-one is enforcing it. But this source is not reliable as it is an opinion from a newspaper. Source J tells us that all ranks of prohibition officers were bribed, mostly the underpaid ones. If this was happening the prohibition would be doomed. But this source is not reliable as it only talks about the worst of places (Chicago). This is ware the gangsters (Al-Capone) had taken over. With my own knowledge I am able to conclude that prohibition was going to be a failure from the beginning, it was inevitable. Most of the sources can also show you this. I think this as Americans in the 1920's wanted alcohol and they were prepared to do anything for it, including buying it more expensive from the gangsters. ?? ?? ?? ?? Habeebullah Yusuf History Coursework - 1 - ...read more.