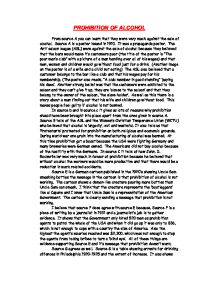 PROHIBITION OF ALCOHOL From source A you can learn that they were very much against the sale of alcohol. Source A is a poster issued in 1910. It was a propaganda poster. The Anti saloon league (ASL) were against the sale of alcohol because they believed that the bars would make it's customers poor (the title of the poster is "The poor man's club" with a picture of a man handing over all of his wages) and that men, women and children would go without food just for a drink. (Another image on the poster is of a wife and a child not eating) The ASL also believed that a customer belongs to the bar like a club and that his wages pay for his membership. (The poster also reads, "A club member in good standing" 'paying his dues'. Another strong belief was that the customers were addicted to the saloon and they can't give it up, they are 'slaves to the saloon' and that they belong to the owner of the saloon, 'the slave holder'. As well as this there is a story about a man finding out that his wife and children go without food. This makes people feel guilty if alcohol is not banned. ...read more.

He said, "You can't cure this thirst by law." Meaning prohibition will not stop people from drinking. Another reason that it did not come about was that people did not support prohibition. Illegal liquor stores "speakeasies" were set up and did very well, selling a homemade alcohol called moonshine. This shows that alcohol was still very much in demand. Source I is a quote from a 'New York music composer' speaking in the 1950s saying that he "Loved speakeasies" he saw them as being exciting and 'romantic'. He says that they had a "movie-like quality" also he saw prohibition as something to unite people. He goes on to say, "You were a special person, you belonged to a special society." This source tells us that public attitudes towards prohibition were good. It tells how he thought it was 'romantic'. This source is quite useful and relatively trustworthy as the composer being quoted was around at the time and he lived through it and tells his feelings and what he thought the public's opinions were. However, it is just one man's opinion so it cannot be totally reliable. Source J is from a book written by a "US journalist in 1931", it tells about Al Capone and how he discovered that there was 'big money' in the 'outlawed liquor business' and of how he 'controlled' the dispensation of 'booze' to Chicago. ...read more.

I have discovered how Capone would buy politicians, pay for the police to turn a blind eye to his activities and intimidate witnesses to any of his illegal operations. Also I have found that he was involved in gang warfare in Chicago with other crime syndicates involved in selling illegal liquor and those trying to 'muscle in' on his 'territory'. He would pay hospital bills for those that he had harmed in order for them not to talk to the authorities. Some people would think that this was a generous gesture and believed it to be the actions of a good man. I have found out that he would give tips to people at the racecourse. This endeared him to those who won and made people believe that he was one of them because he would be 'mixing' with them. But my main reason for saying that Al Capone was not 'public enemy number one' is that the public wanted alcohol and he was the man who was supplying it to them. So by giving the public what they wanted how could he possibly be their enemy? However I can see how in the eyes of the law he could have been seen as public enemy no1 because of the criminal acts that he committed and instigated like GBH, intimation, bribing government officials and even murder. ...read more.