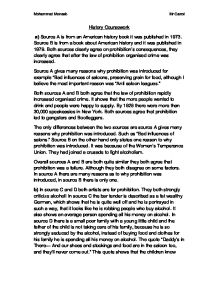 History Coursework a) Source A is from an American history book it was published in 1973. Source B is from a book about American history and it was published in 1979. Both sources clearly agree on prohibition's consequences, they clearly agree that after the law of prohibition organised crime was increased. Source A gives many reasons why prohibition was introduced for example "Bad influences of saloons, preserving grain for food, although I believe the most important reason was "Anti saloon leagues." Both sources A and B both agree that the law of prohibition rapidly increased organised crime. It shows that the more people wanted to drink and people were happy to supply. By 1928 there were more than 30,000 speakeasies in New York. Both sources agree that prohibition led to gangsters and Bootleggers. The only differences between the two sources are source A gives many reasons why prohibition was introduced. Such as "Bad influences of salons." Source B on the other hand only states one reason to why prohibition was introduced. It was because of the Women's Temperance Union. They had joined a crusade to fight alcoholism. Overall sources A and B are both quite similar they both agree that prohibition was a failure. ...read more.

Source G clearly shows that in 1921 there were 9,746 illegal stilts seized and this shows that the actual number could be more because not everyone would have been caught. There was also 414,000 spirits seized. By 1929 there were 15,794 illegal stilts seized, and there were 11,860,000 gallons of spirits seized. This figure is not 100% accurate because of the reason discussed earlier. This is due to some gangsters such as Alphonse Capone they would bootleg alcohol and bribe police so they could bring in illegal alcohol into the country and sell it in speakeasies. Speakeasies were illegal saloons. Source H is from the city of Philadelphia police department, and it shows that the number of arrests for drinking related offences between the years 1920 and 1935 it clearly shows that the statistics prove that there was more crime and illegal alcohol on the streets. These statistics could also be much higher this is because some of the police may have been corrupt and not everyone may have been caught. Another factor is that the statistics about the arrests were only from the state of Philadelphia, In conclusion from these two sources we can clearly see that prohibition was a failure. ...read more.