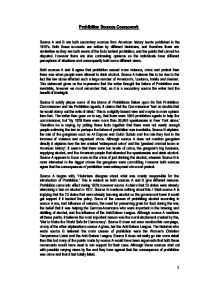 Prohibition Sources Coursework Source A and B are both secondary sources from American history books published in the 1970's. Both these accounts are written by different historians, and therefore there are similarities as they are both aware of the facts behind prohibition, and the points that cannot be disputed. However there are also contrasting opinions as the individuals have different perceptions of situations and consequently hold some different views. Both sources A and B agree that prohibition caused more violence, crime and protest than there was when people were allowed to drink alcohol. Source A believes this to be due to the fact this law alone affected such a large number of American's, 'customs, habits and desires'. This statement gives us the impression that the writer thought the failure of Prohibition was inevitable, however we must remember that, as it is a secondary source the writer had the benefit of hindsight. Source B subtly places some of the blame of Prohibitions failure upon the first Prohibition Commissioner and his Prohibition agents. It claims that the Commissioner 'had no doubts that he would stamp out the evils of drink.' This is a slightly biased view and maybe is more opinion than fact. The writer then goes on to say, that there were 1500 prohibition agents to help the commissioner, but 'By 1928 there were more than 30,000 speakeasies in New York alone.' Therefore he is saying, by putting these facts together that there were not nearly enough people enforcing the law so perhaps the failure of prohibition was inevitable. Source B explains the role of the gangsters such as Al Capone and Dutch Schulz and the role they had in the increase of violence and organised crime. Although source A does not mention gangsters directly it explains how the law created 'widespread crime' and the 'greatest criminal boom in American history'. It seems that there were two levels of crime, the gangster's big business, supplying alcohol, and the American people that attended the speakeasies and drank alcohol. ...read more.

Subsequently they could have made up the results to make themselves seem successful. Source G shows that either the Prohibition agents were becoming more effective. Gangsters were becoming less vigilant or thought that they could bribe their way out of any mess they got into, or more alcohol was being produced. Of course it could have been and probably was a mixture of these things. Source H shows statistics published by the City of Philadelphia Police Department. They show the number of arrests for drinking related offences between 1920 and 1925. The number of people arrested for being drunk dramatically increases from just over 14,000 in 1920 to just over 45,000 in 1923. It then increases further between 1923 and 1925 to a figure of 51,361, an overall increase of over 37,000 in just 5 years. This could mean that a lot more people were consuming alcohol or that the Police were becoming more successful. However, unlike the Agents enforcing Prohibition, this was not a new job for the police and therefore it is unlikely that such a dramatic increase was due to them just doing a better job. The second set of statistics relates to people arrested for drunk and disorderly conduct. These figures are less straightforward, and a little puzzling. Between 1920 and 1923 the figure for people arrested for acting drunk and disorderly increased from 6,097 in 1920 to 8,076 in 1923. However in 1925 the figure drops to just over five and a half thousand lower than in 1920. This is strange as all the other figures in both sources G and H, suggest an increase in the amount of alcohol being drunk, made and sold. The first increase between 1920 and 1923 follows the pattern, but the figure for 1925 does not. There could be a number of reasons why this statistic appears to be anomalous. The first could be that the police were becoming less interested in the smaller crimes, such as people being drunk and disorderly. ...read more.