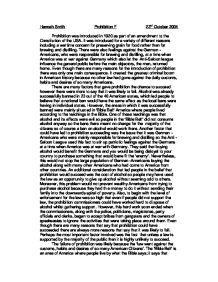 Prohibition was introduced in 1920 as part of an amendment to the Constitution of the USA. It was introduced for a variety of different reasons including a wartime concern for preserving grain for food rather than for brewing and distilling.

Hannah Smith Prohibition F 23rd October 2004 Prohibition was introduced in 1920 as part of an amendment to the Constitution of the USA. It was introduced for a variety of different reasons including a wartime concern for preserving grain for food rather than for brewing and distilling. There were also feelings against the German-Americans, who were responsible for brewing and distilling, at a time when America was at war against Germany which also let the Anti-Saloon league influence the general public before the main objectors, the men, returned home. Even though there are many reasons for the introduction of prohibition there was only one main consequence. It created the greatest criminal boom in American history because no other law had gone against the daily customs, habits and desires of so many Americans. There are many factors that gave prohibition the chance to succeed however there were more to say that it was likely to fail. ...read more.

Nevertheless, this would not stop the large population of German-Americans buying the alcohol along with many other Americans who had come to America from other countries. An additional consideration that led people in the belief that prohibition would succeed was the cost of alcohol so people may have used the law as an opportunity to give up alcohol without seeming odd to others. Moreover, this problem would not prevent wealthy Americans from trying to purchase alcohol because they had the money to do it without sending their family into the downwards spiral of poverty. Also, to begin with the level of enforcement for the law was so high that even if people did not support the law, the prohibition commissioners could have worked hard to dispose of alcohol whilst gathering support. However, this hard work soon ended when the commissioners, along with the police, politicians, magistrates, party officials and clerks, began to accept bribes from gangsters and the owners of speakeasies to ignore the activities that were taking place around them. ...read more.

So the gangsters over-exploited prohibition because it produced them a lot of money. If the gangsters were stopped then the supply of alcohol would have been much less than the demand so people would have been unable to drink however this was prevented by the acceptance of bribes all over American as shown by the cartoon 'The National Gesture'. The arrests that were made for alcohol related offences increased during prohibition, which shows that people were willing to break the law, and that alcohol was still readily available. This made failure likely because it demonstrates how people did not listen to nor care about the law and intended to ignore it whatever the consequence. The sources present more reasons why the failure of prohibition was inevitable even though they do also say that there was a chance of it succeeding. It was the strength of the movement , which was based in 'Bible Belt' America, that was also its weakness because the urban areas did not share the values of 'Bible Belt' America which led to the inevitable, according to the sources, failure of prohibition. ...read more.