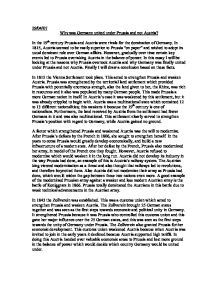 29/04/07 Why was Germany united under Prussia and not Austria? In the 19th century Prussia and Austria were rivals for the domination of Germany. In 1815, Austria seemed to be vastly superior to Prussia "on paper" and wished to adopt its usual dominant role over German affairs. However, gradually over time certain key events led to Prussia overtaking Austria in the balance of power. In this essay I will be looking at the reasons why Prussia overtook Austria and why Germany was finally united under Prussia and not Austria. Finally I will draw a conclusion based on these facts. In 1815 the Vienna Settlement took place. This acted to strengthen Prussia and weaken Austria. Prussia was strengthened by the territorial land settlement which provided Prussia with potentially enormous strength, also the land given to her, the Rhine, was rich in resources and it also was populated by many German people. This made Prussia a more German nation in itself. ...read more.

The Zollverein brought 25 German states together and was seen as the first steps towards economic and political unity in Germany. It strengthened Prussia because it was Prussia who controlled this customs union and this gave her major influence over the 25 German states, and this was seen as the first steps towards the unity of Germany under Prussia. The Zollverein also granted Prussia further economic development. This customs union weakened Austria because when Austria was invited to join in the early years it declined because Austria supported high tariffs. In doing this Austria handed over valuable economic areas to Prussia and lost more ground in the balance of power which would decide which country Germany would be united under. Another factor which strengthened Prussia was the effects of the 1848-49 revolution. The failure of the middle class liberals to unite Germany from below showed that Germany would need to be united from above, Germany would need a powerful country to bring it together. ...read more.

During this period Austria's diplomatic position weakened. In 1854, Austria failed to support Russia during the Crimean war, Russia had previously helped Austria crush insurgents during the 1848 revolutions and cower Prussia. As a result of this, the "holy alliance" was destroyed and Austria lost an important ally. Also, Austria's poor performance in the war against the French in Italy (Solferino and Magenta) in 1859 signaled to Prussia that Austria's army was no longer to be feared. The 1866 Austro-Prussian war showed that the balance of power between Austria and Prussia decisively swung into Prussia's favour. This war completely excluded Austria from German affairs and left the field totally open for Prussia to deal with Germany. With Austria out of the equation, Bismarck waited for the perfect time to unite Germany. This came in 1870 when Bismarck accumulated German nationalism and had Germany accept the Prussian king as leader of Germany. In conclusion, the key factors expressed above show that Germany was united under Prussia due to its immense build up of strength compared to Austria who was gradually weakened and could not cover the gap in the balance of power between itself and Prussia. ...read more.