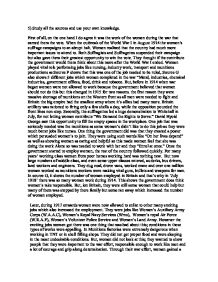 5) Study all the sources and use your own knowledge. First of all, on the one hand I do agree it was the work of the women during the war that earned them the vote. When the outbreak of the World War I in August 1914 the women's suffrage campaigns to an abrupt halt. Women realized that the country had much more important issues to attend to. Both Suffragists and Suffragettes suspended their campaign but also gave them their greatest opportunity to win the vote. They thought if the contribute the government would them think about this more after the World War I ended. Women played vital role performing jobs like nursing, industry work, transport and munitions productions as Source F shows that this was one of the job needed to be ruled, Source G also shows 5 different jobs which women completed in the war "Metal, industries, chemical industries, government offices, food, drink and tobacco. But, before in 1914 when war began women were not allowed to work because the government believed that women should not do this but this changed in 1915 for two reasons. the first reason they were massive shortage of munitions on the Western front as all men were needed to fight and Britain the big empire had the smallest army where it's allies had many more. ...read more.

The women's suffrage campaign was fought hard and to their get this was unbelievable and this opportunity cannot be ruined or wasted. The campaign to win the right to vote for women began in 1850's. There was a mass movement where women wanted to vote in parliamentary elections and sit in Parliament because they sought equality with men. Parliament was the most powerful institution in the Land. The government operated through Parliament and all new laws were made there. In 1890, a notional organisation was formed called the National Union of women's Suffrage Societies (NUWSS). The NUWSS used moderate tactics. Writing books and pamphlets, holding peaceful meetings, organised speeches and supporting MP's who backed their cause. This organisation was mainly middle-class and working class women. Since, the women's demander suffrage were processing as they were allowed to vote in County and Borough elections in 1888and they also allowed to become local councillors in 1907. However, this was far more than many men wanted to grant women whom they said could be trusted to vote sensibly, and that they should leave such matters to their husbands. Later, some women believed that the Suffragist movement with their peaceful tactics was lacking any progress and were refused by the government. ...read more.

Many women went into hiding to avoid being caught, like mice. Afterwards, Suffragettes soon found ways of making this unworkable. Many people belived that the Suffragettes campaign did more disaster than any progress to the cause of the women's suffrage, as they were being told as irresponsible women. Many people, such as MP's were now more against it but meanwhile the NUWSS worked harol to win back support of the public. But something struck them, WW1 began which cause the campaign to stop and contribute to war. All this hard work for very long time cannot be forgotten. In my conclusion, I believe that the work that women did during the war that earned them the vote. However, the women's suffrage did the Suffragette campaign The war effort really changed men's mind, because showed the right way how women should be in the war. Men really liked this, and wanted more and as a reward gave the rights to vote. Also, I believe the NUWWS did also help because people like the way their used their tactics but was disturbed by the Suffragettes (WSPU). If there wasn't a Suffragettes campaign then the war effort would just be a catalyst to speed the process. The NUWWS, by themselves would have progressed but it would have taken a very long time. ...read more.