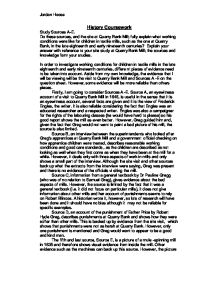 History Coursework Study Sources A-E. Do these sources, and the site at Quarry Bank Mill; fully explain what working conditions were like for children in textile mills, such as the one at Quarry Bank, in the late eighteenth and early nineteenth centuries? Explain your answer with reference to your site study at Quarry Bank Mill; the sources and knowledge form your studies. In order to investigate working conditions for children in textile mills in the late eighteenth and early nineteenth centuries, different pieces of evidence need to be taken into account. Aside from my own knowledge, the evidence that I will be viewing will be the visit to Quarry Bank Mill and Sources A-E on the question sheet. However, some evidence will be more reliable than others pieces. Firstly, I am going to consider Sources A-E. Source A, an eyewitness account of a visit to Quarry Bank Mill in 1845, is useful in the sense that it is an eyewitness account, several facts are given and it is the view of Frederick Engles, the writer. ...read more.

Source C, information from a general textbook by Dr Pauline Gregg (who was of no relation to Samuel Greg), gives evidence about the bad aspects of mills. However, the source is limited by the fact that it was a general textbook (i.e. it did not focus on particular mills), it does not give information about other mills and her account of punishments seems to rely on Robert Blincoe. A historian wrote it, however, so lots of research will have been done and it should have no bias although it may not be reliable for specific examples. Source D, an account of the punishment of Esther Price by Robert Hyde Greg, describes punishments at Quarry Bank and shows how they were softer than other mills. This is backed up by evidence from the site visit, which shows that punishments were not as harsh at Quarry Bank. However, only one punishment is mentioned and Greg would want to appear to be a good and kind man. ...read more.

Only a few machines at a time could be operating to keep noise down, cotton fibre did not fill the air and the machines cannot be working in a state of danger. There is also a small chance that the Gregs have been hiding something away. My other research backs up evidence that Quarry Bank Mill was a good place to work. Samuel Greg put guards on machines and extractor fans before legislation forced him to do so. Greg's punishments were not harsh compared to a lot of other mills. However, most other evidence about mills is bad - my research states that children were hung over machinery by their hands and one girl lost her leg after having been caught in the dangerous machinery. In conclusion, I think that the above information sources are too unreliable to tell us fully what mills were like in the late eighteenth and early nineteenth centuries. For example, most sources have been influenced by Samuel Greg to make his mill look better and due to health and safety rules, the site visit was also too limited to get a good picture of what Quarry Bank Mill used to be like. Jordan Hoose ...read more.