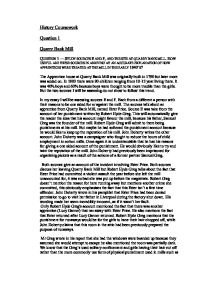 History Coursework Question 1 Quarry Bank Mill QUESTION 1 --- STUDY SOURCES E AND F, AND THE SITE AT QUARRY BANK MILL. HOW USEFUL ARE THESE SOURCES IN ARRIVING AT AN ACCURATE EXPLANATION OF HOW APPRENTICES WERE TREATED AT THE MILL IN THE EARLY 1840'S? The Apprentice house at Quarry Bank Mill was originally built in 1790 but later more was added on. In 1800 there were 90 children ranging from 10-12 year living there. It was 40% boys and 60% because boys were thought to be more trouble than the girls. But the two sources I will be assessing do not show to follow this trend. In my essay I will be assessing sources E and F. Each from a different a person with their reasons to be one sided for or against the mill. The sources talk about an apprentice from Quarry Bank Mill, named Ester Price. Source E was take from the account of her punishment written by Robert Hyde Greg. This will automatically give the reader the idea that his account might favour the mill, because his father, Samuel Greg was the founder of the mill. ...read more.

During our visit to Quarry Bank Mill we visited the apprentice house. While we were there we saw many things like the fact the apprentices had beds with sheets. However the sheets the bed sheets were changed once a month and the beds were changed only once a year. This isn't very healthy as the apprentices didn't have washes very often. These beds would have two to a bed, while in work houses children would sleep on dirty floors, similarly towns like Manchester were suffering from overcrowding and often four to five families would share one small house. With a good nights sleep the apprentices could work harder. Maybe Robert Hyde Greg did this for his advantage, so he could get more out of the apprentices or was it because he believed the apprentices deserved these luxuries. The windows didn't open in the bedroom so during summer the rooms were very hot while in winter the rooms would be incredibly cold. The bedrooms would have bedpans under the bed, this meant that they didn't have to go outside but they would have had to fill up the pan until they could empty it. ...read more.

Both are one sided. Favouring with the author feelings. Neither gave an account from a neutral party. Robert Hyde Greg puts up a good fight, he explains the fact he had been involved in an incident involving the same Ester Price a year prior to her running away. Mr Greg' new way to deter running way was to chop off all the hair of the offender, (the Greg's did not believe in physical punishments). This was seen as a very harsh punishment. But still the punishment did not commence as Mrs Shawcross and Mr Greg's sister (Sally) thought it was far to ruthless. Therefore it shows The mill wasn't so tight on punishments. Because both accounts contradict each other at points it is hard to come to a verdict. Mr Greg in his account writes it in first person, this gives the impression that he was present for the mass majority of the events. While John Doherty seems to have a lack of information at points. Comparing the sources to our site visit many things can be connected. We visited the room in which Ester Price was locked in, and the room in which Mrs Timperly's body had been placed in. Both were adjoining therefore John Doherty's account correctly pointed this out. ...read more.