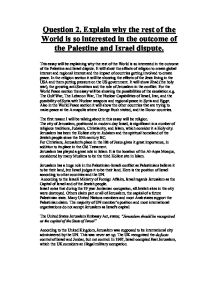 Question 2. Explain why the rest of the World is so interested in the outcome of the Palestine and Israel dispute.

There are growing concerns that the war in the Middle East is dragging more and more countries into the dispute for reasons such as Oil, religion and to create World Peace. This is leading other countries such as Russia, USA and the Arab countries around Palestine are getting involved to help their allies and to make peace and give Palestine and Israel their deserved rights of the land. In July 2006 there was a mass evacuation where countries such as Canada, USA, Italy, Belgium, UK, Germany, Philippines, Greece, Sweden, Denmark and Australia all had nationals living there and started a massive evacuation where ships and helicopters were sent in to evacuate their people from the Palestine and Israel. But Belgium was the only country to evacuate all their nationals from Palestine and avoid any of their nationals getting killed. The USA and the USSR made their allies in the early 1990s as there was a Cold War between the USA and the USSR, and as the Middle East is an important and strategic area, both the Americans and the Russians wanted power and influence there. The USA achieved this by supporting Israel. Israel's Arab neighbours turned to the USSR to support and arm. ...read more.

Saudi Arabia is one of the main players in the Arab and Muslim worlds; its stature is built on its size, its prestige as the birthplace of Islam and status as major oil producer. Syria is one of Israel's staunchest enemies and supports a number of militant groups that carry out attacks against Israel. Their current relationship founders on the continued occupation by Israel of the Golan Heights when Syrian land was taken in the 1967 war. Peace talks between the two countries stalled in January 2000. But Syria withdrew troops from Lebanon in 2005 after three decades; the US has imposed sanctions on Syria, accusing it of supporting terrorism. The European Union has tried to act as a force for peace in the Middle East. The EU is the largest contributor of aid to the Palestinian Authority. I believe in all the rest of the World is so interested in the conflict in the Middle East because they want to create World peace and prevent any chance of it getting worse and maybe lead to World War III. I believe the other countries that are not directly involved in the conflict are doing a very good job to create World Peace and in George Bush's last year he is trying to stop the conflict between Palestine and Israel and to stop Israel occupying Palestinian land. ...read more.