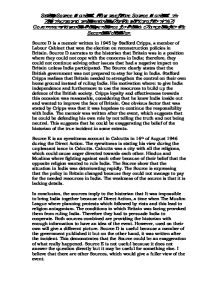 Study Source D and E. How useful are Source D and E in helping you to understand why the policy of British Government towards Independence for India changed after the Second World War.

Source D is a memoir written in 1945 by Stafford Cripps, a member of Labour Cabinet that won the election on reconstruction policies in Britain. Source D narrates to the historian that Britain was in a position where they could not cope with the concerns in India; therefore, they could not continue solving other issues that had a negative impact on Britain unless India participated. The Source clearly states that the British government was not prepared to stay for long in India. Stafford Cripps realizes that Britain needed to strengthen the control on their own home ground instead of ruling India. His motivation where: to give India independence and furthermore to use the resources to build up the defence of the British society. Cripps loyalty and effectiveness towards this occasion was reasonable, considering that he knew India inside out and wanted to improve the face of Britain. One obvious factor that was stated by Cripps was that it was hopeless to continue the responsibility with India. The memoir was written after the event, which suggests that he could be defending his own role by not telling the truth and not being neutral. This suggests that he could be exaggerating the belief of the historian of the true incident in some extents.

Source E is an eyewitness account in Calcutta in 16th of August 1946 during the Direct Action. The eyewitness is stating his view during the unpleasant issue in Calcutta. Calcutta was a city with all the religions, which could cause anger directed towards each other. Hindus and Muslims where fighting against each other because of their belief that the opposite religion wanted to rule India. The Source show that the situation in India was deteriorating rapidly. The Source is expressing that the policy in Britain changed because they could not manage to pay for the needed resources in India. The weakness of the source is that it is lacking details.

In conclusion, the sources imply to the historian that It was impossible to bring India together because of Direct Action, a time when The Muslim League where planning protests which followed by riots and this lead to religion antagonism. The conditions in which Britain was facing provoked them from ruling India. Therefore they had to persuade India to cooperate. Both sources combined are providing the historian with enough information to have an idea of the event. However, used on their own will give a different picture. Source D is useful because a member of the government published it but on the other hand, it was written after the incident. This demonstrates that the Source could be an exaggeration of what really happened. Source E is not useful because it does not answer the question directly but it may be useful for something else. I believe that there are other Sources, which would give a fuller view of the event.