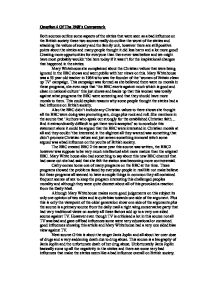 Question 4 Of The 1960's Coursework Both sources outline some aspects of the sixties that were seen as a bad influence on the British society these two sources really do outline the worst of the sixties and attacking the values of society and the family unit, however there are still positive points about the sixties and many people thought it did less harm and a lot more good! Creating more opportunities for everyone than there ever was before and we might have most probably wouldn't be here today if it wasn't for the inspirational changes that happened in the sixties. Mary Whitehouse she complained about the Christian values that were being ignored in the BBC shows and went public with her views on this. Mary Whitehouse was a 53 year old teacher in 1964 who was the founder of the 'women of Britain clean up TV' campaign. This campaign was formed as she believed there were no morals in these programs, she even says that 'the BBC exerts against much which is good and clean in national culture' this just shows and backs up that this woman was totally against what programs the BBC were screening and that they should have more morals to them. This could explain reasons why some people thought the sixties had a bad influence on British society. ...read more.

Next source G this is about the singer Janis Joplin and all about her over dose of drugs and a very saddening death due to drug abuse. This source is a biography of Janis Joplin and the unfortunate death of her drug abuse. Unfortunately Janis Joplin basically sums up all the negativity in the sixties and there are some very bad influences that make the sixties seem like a bad influence overall on British society. This source shows us that there was an increase in drugs and more and more were being used by famous major stars for example Jimmy Hendrix had also died of a drug over dose, this is rather quite sad for such talents go to waste and unfortunately reflects rather badly on the sixties. These stars were idolised by millions of kids as well showing a very shocking example to the kids making the sixties seem like it had some very bad influences of the younger generation. Of course it was not just Janis Joplin who was on drugs the world famous Beatles were eligible on drugs you could pretty much tell as there whole appearance changed from very clean cut sensible young men to drug abusing junkies. You could see that they were taking drugs as there was many factors that changed with them like there song lyrics complete change of music style and the way they dressed. ...read more.

But it does not reflect the fact that it was only a minority within society that had invested into the new drug culture so failing to give us a completely balanced argument. Now for some other information, Joanna Lumley being influenced by the Beatles who took drugs seems like a bad influence but she made a respectable career for herself and they weren't a bad influence to her at all if anything they were a good influence to her. And even though Janis Joplin did die of a drug over dose and drank far to much that might not be because she's a massive superstar it may have been to do with something unrelated like family issues. The Beatles were most probably the biggest band out in the sixties but even they had problems they were a cool clean cut band who sang about love to get sucked into a psycadelic drug influenced band. Also the contraceptive pill and abortion give woman more control but this was very much against a lot of morals. Woman now know they could control when they have a kid they could sleep around a lot, what quite a few woman did!, or go off completely the whole idea of having kids. These new developments could also stop marriages or the whole point of marriage seeing that they would no longer save sex for marriage witch was a very traditional thing before the sixties to sleeping around. ...read more.