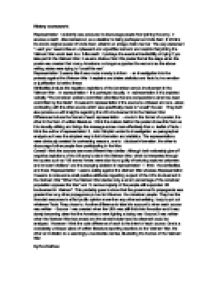 History coursework: Representation 1 evidently was produced to discourage people from joining the army. It exudes a death -like demeanour, as a skeleton is being portrayed as Uncle Sam, it mimics the iconic original poster of Uncle Sam, albeit in an antagonistic manner. The very statement "I want you" seems like an unpleasant and unjustified demand and depicts that joining the Vietnam War would lead to a futile death. It portrays the eventual inevitability of dying if you take part in the Vietnam War. It seems obvious from this poster that at the stage when the poster was created that many Americans no longer supported the war and as the above writing states were trying to "unsell the war". ...read more.

I think the makers behind the poster chose this form as it is visually striking and brings the message across more effectively than a leaflet of facts. I think the author of representation 2, John Simpkin wrote his investigation as paragraphed analysis as it was the simplest way to list information and statistics. The representations were obviously created for contrasting reasons, one to disclose information, the other to discourage further people from participating in the War. Overall I think the sources are more different than similar. Although both noticeably give off negative depictions of the US army's role in the Vietnam War, which is interpreted through the quotes such as "US armed forces were also found guilty of torturing captured prisoners and innocent civilians" and the decaying skeleton in representation 1 I think the similarities end there. ...read more.

Source 2 was written when the Vietnam War had ended and the whole incident and its aftermath could be analysed. However I think the sole difference of each is the intent of each source. One is a completely unbiased piece of written literature reporting reactions to the Vietnam War, the other an invitation to a seemingly unavoidable demise, illustrating the horrors of the Vietnam War. By Eva Mathew Question- study representatives 1 & 2. They are both representations of the way in which people in the USA reacted to the Vietnam War. How far do these representations differ? How to get full marks: Analyse the sources and identifies a range of similarities and differences in representations. Uses precisely selected detail from the provided representations to support the explanation and makes a judgement about extent. ...read more.