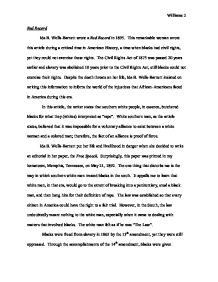 Red Record Ida B. Wells-Barnett wrote a Red Record in 1895. This remarkable woman wrote this article during a critical time in American History, a time when blacks had civil rights, yet they could not exercise those rights. The Civil Rights Act of 1875 was passed 20 years earlier and slavery was abolished 10 years prior to the Civil Rights Act, still blacks could not exercise their rights. Despite the death threats on her life, Ida B. Wells-Barnett insisted on writing this information to inform the world of the injustices that African-Americans faced in America during this era. In this article, the writer states that southern white people, in essence, butchered blacks for what they (whites) interpreted as "rape". White southern men, as the article states, believed that it was impossible for a voluntary alliance to exist between a white woman and a colored man; therefore, the fact of an alliance is proof of force. Ida B. Wells-Barnett put her life and livelihood in danger when she decided to write an editorial in her paper, the Free Speech. Surprisingly, this paper was printed in my hometown, Memphis, Tennessee, on May 21, 1892. ...read more.

The Sioux were upset about the reduction of the appropriation for rations and the delays attending the enactment of laws to enable the Department of the Interior to perform the engagements entered into with them. From this article and what I understand from the text, the Wounded Knee Massacre is one of the most merciless events that our history holds in its deep dark past. I understand why the Sioux warriors were excited by the teachings of their medicine men and chiefs. Hearing of an Indian messiah that would endower them with power to destroy the white man was more than enough to excite the Sioux. The Sioux expressed their excitement in a set of dances and rites known as the Ghost Dances. These dances made the white settlers who lived near the reservation uneasy; therefore, the Army was called in to protect the settlers. I believe if the white man had not begun to take land from the Native Americans, then this massacre would have not happened. The article states that from March 4, 1889 to December 9, 1891, about 23,000,000 acres of Indian reservations was taken and added to the public domain, this is a harsh fact. ...read more.

Many other things in this contract disgust me. One such thing is that the croppers could not sell anything until the landowner was paid, yet before a cropper could bring home his net gain; the landowner had taken an eighteenth of the croppers fifty percent. The reason for this is the landowner charged the cropper to gin and pack all of his (cropper) cotton. In addition, the cropper had to haul, plow in cotton and corn stalks, clean out ditches, and repair fences. Above all the freedoms the sharecropper had, nothing could be more discouraging than the contracts that they were forced to sign. When I speak of force, I do not mean physical force. These people had no other choice in the matter; this is why I say it is passive slavery. Instead of being beaten, these croppers could now be thrown into jail for not complying with the sharecropper's contract. The life of a sharecropper can be best described as a person trapped in a revolving door; trapped in a system that was never designed for the sharecropper to become economically stable, but to keep them economically unstable and needy. They were trapped in a continuous effort to pay off their debts. Consequently, most sharecroppers never became wealthy. Williams 2 ...read more.