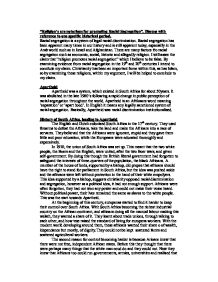 &quot;Religion's are notorious for promoting Racial Segregation&quot;. Discuss with reference to one specific historical period.

"Religion's are notorious for promoting Racial Segregation". Discuss with reference to one specific historical period. Racial segregation is a system of legal racial discrimination. Racial segregation has been apparent many times in our history and is still apparent today, especially in the Arab world such as in Israel and Afghanistan. There are many factors fro racial segregation such as economic, social, historic and allegedly religion. I will asses the claim that "religion promotes racial segregation" which I believe to be false. By examining evidence from racial segregation in the 19th and 20th centuries I intend to conclude my claim. Christianity has been an important force within this, as has Islam, so by examining these religions, within my argument, I will be helped to conclude to my claim. Apartheid Apartheid was a system, which existed in South Africa for about 50years. It was abolished in the late 1980's following a rapid change in public perception of racial segregation throughout the world. Apartheid is an Afrikaans word meaning 'separation' or 'apart hood'. In English it means any legally sanctioned system of racial segregation. Basically, Apartheid was racial discrimination institutionalised. History of South Africa, leading to Apartheid The English and Dutch colonised South Africa in the 17th century. They used firearms to defeat the Africans, take the land and make the Africans into a race of servants. They believed that the Africans were ignorant, stupid and they gave them little and poor education, while the Europeans were educated thoroughly and expensively. In 1910, the union of South Africa was set up. This meant that the two white people, the Boers and the English, were united, after the two Boer wars, and given self-government. By doing this though the British liberal government had forgotten to safeguard the interests of three-quarters of the population, the black Africans. A member of the house of lords, supported by a bishop, did propse that africans should have the right to stand for parliament in South Africa, but the idea was pushed aside and the afircans were left without protection in the hand of their white empolyers. ...read more.

After the failure of the reconstruction, white people saw their chance to obtain that power they once had and so took it, getting revenge for losing cheap labour and the satisfaction of power. Throughout all this, Christianity gave great support. In Mt. Olive Baptist church, in Tefell county, Georgia, education classes were frequently held, of which they would teach to those with less education than themselves, the black people. This suggests that the churches were trying to solve the problems in society, caused by racial segregation and so opposed racial segregation. The so-called "Jim Crow Laws" were now regulated racial segregation. In 1896, the Supreme Court concluded the Jim Crow laws were constitutional as long as they allowed for separate but equal facilities. In the following years, the court made this statement a hollow and meaningless requirement by approving discrimination, even in the face of evidence of profound inequalities and un-religious ideas in practise. In addition to the Jim Crow Laws, society was expected to enforce the Jim Crow Etiquette. This was a set of unwritten rules governing how blacks and whites should interact. Not only were they politically separated but socially separated. Breaking this code could result in a lynching, a brutal form of sadistic murder. Between 1578-1898, 10,000 lynching took place. Murder s totally against most religions and when it is shown with no remorse as it is here; it is easy to suggest that the racial segregation and discrimination appearing here was definitely not religious. The murder of Emmett Till in 1955 shows that even with changing public perception of the racial segregation laws after WWII, racial segregation was still at large. Many black radio preachers and church preachers were talking about Emmett Till, demanding "something must be done in Mississippi now". This shows that Christianity here criticised the actions of racial segregation and the laws in America that controlled this segregation. ...read more.

Rather it is, like racism, historic, social and economic problems promoting racial segregation and religion. Why do we practise racial segregation? Often in the past when racial segregation has been practised, it has been legal. The laws have allowed it to be practised. This could be one reason why it has been practised. Our conscience is often controlled by an external authority; our friends and family, but more by laws, and by people who set them, the government. This is due to punishments being set to discipline those who break he law. However not all laws are good ones, such as those legalising racial segregation. Even so, from an early age these are pressed firmly into our conscience and so even if we learn they are not right (at an older age), we learn we must do them, to survive in society and to not disappoint external authorities. This principle allows us to accept the practise of racial segregation, even if it seems unjust. The whole decision making of what is just and what is unjust becomes turned upside down when you have a corrupt external authority. Religion helps provide justice. As I have already shown, religion is a powerful motivation and inspiration to people, overriding external authorities when it seems just. The reason for this is that religion answers first to god, then society and god principley aims to achieve justice. Racial segregation and racism is unjust and therefore god seeks to fight against it through religion, and not promote it. There is a thin line between the connections of religion and racism. Promoting it and working against it stem from religious doctrines. Though South Africa's racial segregation was not primarily anything to do with religion, the aim was to protect the white race and so suggests it comes from the aim to protect ones group in society. Therefore religion can promote racial segregation, though not meaning to, but the force that works against racial segregation is much stronger as it is based on faith and not so much laws. ...read more.