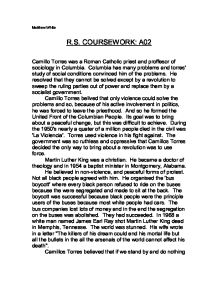 Matthew White R.S. COURSEWORK: A02 Camillo Torres was a Roman Catholic priest and proffesor of sociology in Columbia. Columbia has many problems and torres' study of social conditions convinced him of the problems. He resolved that they cannot be solved except by a revolution to sweep the ruling parties out of power and replace them by a socialist government. Camillo Torres belived that only violence could solve the problems and so, because of his active involvement in politics, he was forced to leave the priesthood. And so he formed the United Front of the Columbian People. Its goal was to bring about a peaceful change, but this was difficult to achieve. During the 1950's nearly a quater of a million people died in the civil was 'La Violencia'. Torres used violence in his fight against. ...read more.

They had succeeded. In 1968 a white man named James Earl Ray shot Martin Luther King dead in Memphis, Tennesse. The world was stunned. His wife wrote in a letter "The killers of his dream could end his mortal life but all the bullets in the all the arsenals of the world cannot affect his death". Camillos Torres believed that if we stand by and do nothing then we infact are evil, and guilty of doing wrong to the people. The use of force was a last resort for Torres and as a Christian he had to do something. If you hate evil you have to fight it. "A Catholic who isn't a revolutionary is living in mortal sin" this means if your not trying to overthrow the corrupted government then you are a mortal sinner. ...read more.

When black people refused to use the buses unless the injustice stopped, their profits plumetted and so eventually after 2 years of walking miles to work everyday the black people received desegregation on the buses. This movement became the 'Civil Rights Movement' and in 1960 Martin Luther King became its leader. Some of his arguements against using violence were things like 'blessed be the peacemaker'. In the garden of Gethsemane when someone cut off the ear of the servant of high priest Mark 14:47 then Jesus healed the man and said "he who lives by the sword dies by the sword" Matthew 5:7 where it says "If you are slapped by a man show him the other cheek" this means: do not raise to a person's bait and don't lower yourself to their level. Also the commandment says "Thou shallt not kill" ...read more.