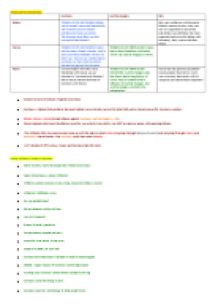 ﻿History of First World War: Germany Austria-Hungary Italy Britain TENSION OVER MILITARISM: Britain was extremely successful industrially, but Germany soon overtook and became more successful. The German naval fleet was less successful than Britain?s. Italy was in alliance with Germany, Britain?s enemy country. Italy was not very organized or powerful, and Britain was definitely the most organised and powerful (along with Germany), they were an obvious threat. France TENSION OVER MILITARISM: France and Germany shared a border, and in 1870, Germany defeated France in a short war. France was worried about Germany, so they tried to protect themselves against the Germans. TENSION OVER IMPERIALISM: France had a close friendship with Russia, which was Austria-Hungary?s enemy. Russia German leaders felt their close friendship with Russia was an attempt to ?surround and threaten? them. Russia shared their fear of Germany with France. TENSION OVER IMPERIALISM (COLONIES): Austria-Hungary and had Russia had a long history of rivalry. Russia wanted to have influence of Austria-Hungary, but Austria-Hungary wanted to be independent. Russia had the greatest population (much greater than Italy?s), but it was extremely backwards with its weapons and industrial development 1. Greatest source of tension= England & Germany 1. Germany + England had problems because England was extremely successful industrially and extremely powerful- Germans = jealous 1. Britain, France + Russia formed alliance against Germany, Austria-Hungary + Italy 2. Preserving peace between the alliance countries was priority, but priority was NOT to preserve peace with opposing alliance 1. ...read more.

War was avoided, Russia backed down 1. The assassination of Franz Ferdinand sparked the war Events leading up to the War 1. 28 June- the heir to Austro-Hungarian throne, Franz Ferdinand, is assassinated in Bosnia 1. 23 July- Austria blames Serbia for killing the Archduke 1. 28 July- Austria declares war on Serbia. Belgrade (a city in Serbia) is shelled 1. 29 July- Russian army gets ready to help Serbia defend itself from Austro-Hungarian attack 1. 29 July- Germany, Austria?s ally, sends a demand to Russia ordering it to hold back from helping Serbia 1. 1 August- Germany declares war on Russia. Germany also begins to move its army towards France, Russia?s ally 1. 2 August- the French army is put on a war footing, ready to fight a German invasion 1. 3 August- Germany declares war on France and invades through the neutral Belgium. Britain orders Germany to withdraw from Belgium. 1. 4 August- the Germans are still in Belgium, Britain declares war on Germany. 1. 6 August- to complete the ?picture?, Austria declares war on Russia Start of War 1. Mobilising: a country or its government prepare and organize (troops) for active service 1. Germany?s excuse for mobilising: said they were being threatened by Russia?s mobilisation 1. August 1st: Germany declares war on Russia 1. August 3rd: Germany declares war on France, invading through the neutral Belgium 1. August 4th: Britain declared war on Germany Life in the trenches 1. It was:-cramped ?dusty -many rats -lice & frog infestation ?muddy -smelly 1. ...read more.

Women had done dangerous jobs in the war, proving women were strong and independent 1. The new wartime government had new MPs who were keen to give women the vote 1. Men who were against women suffrage were away fighting, they could therefore not organise opposition 1. Women wouldn?t let go, give up, they wouldn?t let people forget ?Persistence is the turn of excellence? Emily Davison?s Death 1. On June 5th 1913, it was the day of the famous Epsom Derby horse racing, which the Kings Horse would be competing in 1. A suffragette, Emily Davison, was there, she had been in prison 9 times due to her campaigning 1. As the horses rounded Tattenham Corner, Emily rushed out and tried to take hold of the Kings Horse 1. The kings horse (Anmer) kicked her in the head with his hoof 1. At the time people thought Emily had purposely killed herself (suicide) 1. It was later found out, she was just trying to attach a Suffragette banner onto the King?s horse, Anmer. 1. She was seen as a martyr who died for her cause, her funeral was attended by thousands (not just suffragettes) 1. The first articles after her death portrayed her as a fool who almost killed the kings horse along with herself 1. Then just 10 days later, after her ?amazing? funeral, the newspapers portrayed her as a fearless hero and martyr 1. Women over 21 got the vote in 1928 and same for men 1. 1918, women over 30 get the vote 1. Nancy Astor elected first MP in 1918 ...read more.