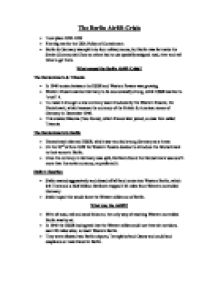 The Berlin Airlift Crisis * Took place 1948-1949 * First big test for the USA Policy of Containment. * Berlin & Germany was split into four military zones, but Berlin was far inside the Soviet (Communist) Zone so others had to use specially assigned road, river and rail links to get there. What caused the Berlin Airlift Crisis? The Deutschmark & Trizonia * In 1946 tension between the USSR and Western Powers was growing. * Western Powers wanted Germany to be economically strong, while USSR wanted to 'crush' it. * To make it stronger a new currency was introduced by the Western Powers, the Deutshmark, which because the currency of the British & American zones of Germany in December 1946. ...read more.

Stalin's Reaction * Stalin reacted aggressively and closed off all land routes into Western Berlin, which left Three and a Half Million Berliners trapped 110 miles from Western controlled Germany * Stalin hoped this would force the Western allies out of Berlin. What was the Airlift? * With all road, rail and canal links cut, the only way of reaching Western controlled Berlin was by air. * In 1945 the USSR had agreed that the Western allies could use three air corridors, each 20 miles wide, to reach Western Berlin. * They were allowed two Berlin airports, Termplehof and Gatow and could land seaplanes on Lake Havel in Berlin. ...read more.

This caused 79 people's deaths. * In total 278,000 flights were made, carrying 2.3 million tonnes of supplies. Coal alone was 2/3 of the supplies. The total cost of the airlift was about $200 million. The End of the Berlin Airlift * On the 12th of May 1949 the USSR called off the blockade. They failed to stop the Western allies supplying their part of Berlin. * This was the first victory for containment, but it made obvious that Germany was very divided. * In 1949 the Three Western Zones joined to Form West Germany (Federal Republic of Germany), whereas the Soviet zones formed East Germany (German Democratic Republic). This was the way it stayed until November 1989. ?? ?? ?? ?? ...read more.