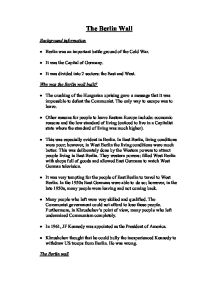 Revision Notes on the Berlin Wall

The Berlin Wall Background information * Berlin was an important battle ground of the Cold War. * It was the Capital of Germany. * It was divided into 2 sectors: the East and West. Why was the Berlin wall built? * The crushing of the Hungarian uprising gave a message that it was impossible to defeat the Communist. The only way to escape was to leave. * Other reasons for people to leave Eastern Europe include: economic reasons and the low standard of living (enticed to live in a Capitalist state where the standard of living was much higher). ...read more.

In the 1950s East Germans were able to do so; however, in the late 1950s, many people were leaving and not coming back. * Many people who left were very skilled and qualified. The Communist government could not afford to lose these people. Furthermore, in Khrushchev's point of view, many people who left undermined Communism completely. * In 1961, JF Kennedy was appointed as the President of America. * Khrushchev thought that he could bully the inexperienced Kennedy to withdraw US troops from Berlin. He was wrong. The Berlin wall * At 2am on the 13th August 1961, East German soldiers erected a barbed wire along the boarder of East and West Berlin. ...read more.

Reaction from the West * Access to East Berlin was guaranteed to the Allies since 1945. * In 1961, US diplomats and troops crossed regularly into East Berlin to see hoe the Soviets would react. * On 27th October, Soviet tanks pulled to Checkpoint Charlie and refused to allow excess to the East. All day, US and Soviet tanks faced each other in a stand-off. After 18 ours, the tanks retreated one by one. Result of the Berlin wall * Khrushchev ordered Ulbricht to avoid any actions that increased tension. * The US thought that the wall was not a nice solution, but it was much better than war. * The wall stayed and for the next three decades, remained a symbol of division between the Communist East and Capitalist West. ...read more.