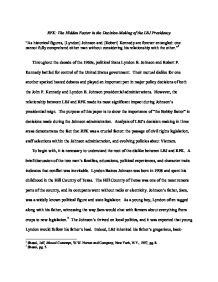 RFK: The Hidden Factor in the Decision-Making of the LBJ Presidency

RFK: The Hidden Factor in the Decision-Making of the LBJ Presidency "As historical figures, [Lyndon] Johnson and [Robert] Kennedy are forever entangled: one cannot fully comprehend either man without considering his relationship with the other."1 Throughout the decade of the 1960s, political titans Lyndon B. Johnson and Robert F. Kennedy battled for control of the United States government. Their mutual dislike for one another sparked heated debates and played an important part in major policy decisions of both the John F. Kennedy and Lyndon B. Johnson presidential administrations. However, the relationship between LBJ and RFK made its most significant impact during Johnson's presidential reign. The purpose of this paper is to show the importance of "the Bobby factor" in decisions made during the Johnson administration. Analysis of LBJ's decision-making in three areas demonstrates the fact that RFK was a crucial factor: the passage of civil rights legislation, staff selections within the Johnson administration, and evolving policies about Vietnam. To begin with, it is necessary to understand the root of the dislike between LBJ and RFK. A brief discussion of the two men's families, educations, political experiences, and character traits indicates that conflict was inevitable. Lyndon Baines Johnson was born in 1908 and spent his childhood in the Hill Country of Texas. The Hill Country of Texas was one of the most remote parts of the country, and its occupants went without radio or electricity. Johnson's father, Sam, was a widely known political figure and state legislator. As a young boy, Lyndon often tagged along with his father, witnessing the way Sam would chat with farmers about everything from crops to new legislation.2 The Johnson's thrived on local politics, and it was expected that young Lyndon would follow his father's lead. Indeed, LBJ inherited his father's gregarious, back-slapping political style, he "delighted in the sweaty personal tangle of local politics; there was no doubt he would end up in Austin, if not Washington."3 Worlds away in Boston, few would have predicted the same of the third son and seventh child of Ambassador Joseph Kennedy. ...read more.

Thus, when he did, RFK contends, they were stuck with him.21 After winning election, the Kennedy's had promised LBJ an active vice-presidency. The first area where the new President sought to use his second-in-command was in the area of civil rights. Johnson, a southerner, did not have an overwhelming legislative reputation as being pro-civil rights, however, from personal accounts it appears that he did have personal beliefs in the promotion of civil rights.22 JFK wanted to appoint LBJ as the chair of the Committee on Equal Employment Opportunity (CEEO). Johnson tried to dodge the appointment, he felt it would "trap him between northern liberals, who would complain he did too little, and southern conservatives, who would attack him for doing too much."23 LBJ's hesitation was all Bobby needed to consider him a "coward," on the issue and begin taking shots at his commitment to the cause. RFK would attend CEO meetings and attack the vice-president "in a most vicious manner. He'd ridicule him, imply that he was insincere."24 RFK's conviction that LBJ was not really dedicated to the advancement of civil rights led to Johnson being excluded from the discussion and drafting of the 1963 civil rights bill.25 Although miffed about not being part of the discussion, Johnson did little to appear as though the issue of civil rights was one he wanted to take on. Burke Marshall, a prominent member of the Justice Department's Civil Rights Division, characterized Johnson's involvement with civil rights as "diffident... expect for specific assignments like the CEEO."26 On November 22, 1963 everything changed. With JFK's assassination, Lyndon Johnson ascended to the presidency and a new order began. One of the first legislative targets of the new administration was civil rights. In the passage of the civil rights legislation, Johnson's cognicanze of Bobby Kennedy's positions were a factor in his decision to pursue the civil rights bill. To be sure, a number of factors went into his decision to push civil rights legislation: to heal a wounded, divided nation following JFK's assassination, to appease liberals, and to simply do what he considered the right thing. ...read more.