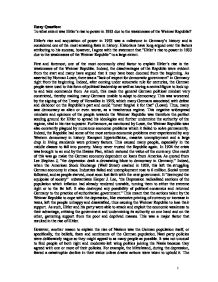 Essay Question: To what extent was Hitler's rise to power in 1933 due to the weaknesses of the Weimar Republic? Hitler's rise and acquisition of power in 1933 was a milestone in Germany's history and is considered one of the most amazing feats in history. Historians have long argued over the factors attributing to his success, however, I agree with the statement that "Hitler's rise to power in 1933 due to the weaknesses of the Weimar Republic" to a large extent. First and foremost, one of the most commonly cited factor to explain Hitler's rise is the weaknesses of the Weimar Republic. Indeed, the disadvantages of the Republic were evident from the start and many have argued that it may have been doomed from the beginning. As asserted by Norman Lowe, there was a "lack of respect for democratic government" in Germany right from the beginning. Indeed, after coming under autocratic rule for centuries, the German people were used to this form of political leadership as well as having a central figure to look up to and take commands from. As such, this made the general German political mindset very constricted, thereby making many Germans unable to adapt to democracy. This was worsened by the signing of the Treaty of Versailles in 1919, which many Germans associated with defeat and dishonor on the Republic's part and could "never forgive it for that" (Lowe). ...read more.

The Nazis, with their strong anti-Communist stand, naturally gained the support of many landowners and businessmen. As aforementioned, Hitler's prejudice against the Jews struck a chord in many Germans and the Nazi's social policies, such as better pensions and reducing unemployment, appealed to the common man and also many traditional socialists. Lastly, Hitler had used the signing of the Treaty of Versailles as one of his main areas to garner support. The Nazis proclaimed that they would abolish the Treaty of Versailles, that they felt unfairly punished Germany. Evidently, this was a popular policy for many Germans. Through propaganda, the German population started feeling that the Weimar Republic was indeed wrong to sign the Treaty of Versailles and therefore blamed all evils such as inflation due to reparations on the Weimar Republic. Thus, as shown from the numerous examples above, the German population, provided fertile ground and ample opportunities for Hitler to exploit their fears, sentiments and beliefs to gain their support and finally rise to power. Finally, the strength of the Nazi leader - Adolf Hitler, especially in terms of his personality and leadership abilities as well as his strategies and propaganda he used to garner support was vital in resulting in the rise of Nazism. Hitler left WWI disillusioned and bitter. He felt the war had ended too soon and that the Weimar Republic betrayed Germany out by agreeing to the Treaty of Versailles. ...read more.

In fact, if one looks at the above 3 factors, it is arguable that Hitler's strength as well as the fears, beliefs and sentiments of the German population were in fact a manifestation of the weaknesses of the Weimar Republic. As mentioned above, one of the main strengths of Hitler and reason as to why he was able to rise to power was because he was able to p exploit the weaknesses of the Weimar Republic. These weaknesses gave him the fertile ground and ample opportunities for him to propagate the people with his ideologies and gain their support. This is substantiated by Stephen Lee, who wrote, "without the economic crisis, it is doubtful whether Hitler would have had much chance of attaining power". Indeed, without the widespread discontent and unhappiness of the people due largely in part to the weaknesses of the Weimar, Hitler would not have had the chance to rise to power. Furthermore, it was because the people had lost faith in the Weimar, and were unsure of whether it could do things like keep the Communist threat in control or provide peace, bread and land that the Nazis promised, that there existed the abovementioned fears, sentiments and beliefs of the people which Hitlr could exploit. Therefore I agree to a large extent that Hitler's rise to power was indeed due to the weaknesses of the Weimar Republic and not because of Hitler's strengths. ?? ?? ?? ?? 1 ...read more.