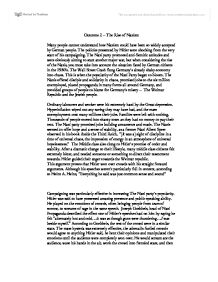 Outcome 2 - The Rise of Nazism Many people cannot understand how Nazism could have been so widely accepted by German people. The policies presented by Hitler were shocking from the very start of his campaigning. The Nazi party promoted anti-Semitic attitudes and were obviously aiming to start another major war, but when considering the rise of the Nazis, you must take into account the situation faced by German citizens in the 1930's. The Wall Street Crash flung Germany's already shaky economy into chaos. This is when the popularity of the Nazi Party began to bloom. The Nazis offered disciple and solidarity in chaos, promised jobs to the six million unemployed, placed propaganda in many forms all around Germany, and provided groups of people to blame for Germany's misery - The Weimar Republic and the Jewish people. Ordinary labourers and worker were hit extremely hard by the Great depression. ...read more.

Hitler was said to have possessed amazing presence and public speaking ability. He played on the emotions of crowds, often bringing people from tears of sorrow, to screams of rage in the same speech. Joseph Goebbels, head of Nazi Propaganda described the effect one of Hitler's speeches had on him by saying he felt "alternately hot and cold...it was as though guns were thundering...I was beside myself." According to Goebbels, the rest of the crowd were in a similar state. The mass hysteria was extremely effective, the adrenalin fuelled crowds would agree to anything Hitler said, he bent their opinions and manipulated their emotions until the audience were completely won over. He would scream ate the audience, wave his hands in the air, work the crowd into frenzied state, and then finish his speeches with a damning remark to his opponents, such as "And it is all the fault of the JEWS!!" ...read more.

The Hitler Youth and German Maidens league were not Christian groups, as the Church was opposed to Nazi policies. Hitler aimed to destroy anyone who opposed him. He made many speeches discrediting the Church, in one of these claiming that "The Christian Church build upon the ignorance of men and strive to keep large portions of the people in ignorance" Hitler's persuasive speaking turned many people away from the church. The former church goers now had no-one to idolise but Hitler. Once you have examined to events and circumstances surrounding Hitler's rise to power, it is easier to see how intelligent people could have succumbed to Nazi policies. It is also easier to make comparisons between the irrational hate and fear of Jews, made to seem rational, and the irrational hate and fear that many Australians today feel toward terrorism and those who are involved in it. Although many of the things that the Nazis represented were so obviously wrong, one must understand that the German people supported Nazism simply because they believed it was the best thing for their country and families. ...read more.