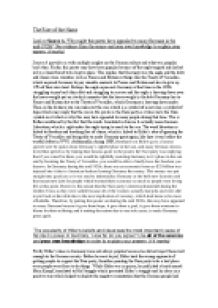 Rise of the Nazis - analysis of sources.

Transfer-Encoding: chunked ﻿The Rise of the Nazis Look at Source A. Why might this poster have appealed to many Germans in the mid-1920s? Use evidence from the source and your own knowledge to explain your answer. (6 marks) Source A provides us with multiple insights on the German culture and what was popular back then. Firstly, this poster may have been popular because of the eagle trapped and locked in by a chain forced to be kept in place. This implies that Germany was the eagle and the bolts and chains were countries such as France and Britain or things like the Treaty of Versailles, which required Germany to pay sizeable amounts to France and Britain and also to give up 13% of their own land. Perhaps the eagle represents Germany at that time in the 1920s struggling to pay back their debt and struggling to survive and the eagle is heaving down over the heavy weight put on it which connotes that the heavy weight is the debt Germany has to France and Britain due to the Treaty of Versailles, which Germany is heaving down under. Then, in the distance you can make out the sun, which is a symbol of a new day, a symbol of hope which may imply that the sun in this poster is the Nazi party as it does have the Nazi symbol on it which is why this may have appealed to many people during that time. ...read more.

burns down thanks to a communist extremist which leads Hitler to use the Enabling Act by triggering Article 48, as the biggest mistake that Article 48 made was that it did not state what an emergency was. Hitler saw this opportunity and called the burning down of the Reichstag an emergency when it really was not and he passed decrees which made him have preliminary powers which was signed by President von Hindenburg, therefore making Hitler a dictator for four years as by law it had to be renewed every 4 years which it was twice. By having preliminary power over Germany, Hitler banned all other parties so it was just the Nazis in the government as it was the new law. The mistakes made by past politicians and the weakened economy of Germany did lead it to have Hitler in power. In conclusion, I do believe that Hitler?s popularity and ideas did have a lot to do with his rise to power but I also believe that the mistakes made by all of the past politicians did have something to do with Hitler rising to power. Moreover, I also believe that because of the deep rooted hatred of the government and the desperation for a change also lead Hitler to being in power because Hitler was nothing without the people?s support and he managed to present himself in a very likeable way which lead him to obtaining the people?s support. Sahiba Rikhraj 9L ...read more.