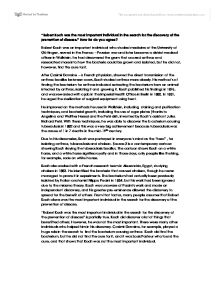 Robert Koch was the most important individual in the search for the prevention of disease...how far do you agree?

"Robert Koch was the most important individual in the search for the discovery of the prevention of disease." How far do you agree? Robert Koch was an important individual who studied medicine at the University of G�ttingen, served in the Franco - Prussian war and later became a district medical officer in Wollstein; he had discovered the germ that caused anthrax and researched more into how the bacteria could be grown and isolated, but he did not, however, find the cure for it. After Casimir Davaine - a French physician, showed the direct transmission of the anthrax bacillus between cows, Koch studied anthrax more closely. ...read more.

and the Petri dish, invented by Koch's assistant Julius Richard Petri. With these techniques, he was able to discover the bacterium causing tuberculosis in 1882 and this was a very big achievement because tuberculosis was the cause of 1 in 7 deaths in the mid-19th century. Due to his discoveries, Koch was portrayed in everyone's mind as the "hero", for isolating anthrax, tuberculosis and cholera. Source 3 is a contemporary cartoon showing Koch slaying the tuberculosis bacillus. The cartoon shows Koch on a white horse, and a white horse signifies royalty and in those days, only people like the king, for example, rode on white horses. ...read more.