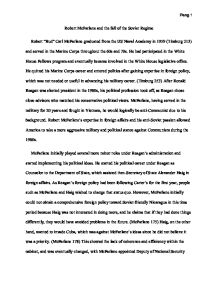 Robert MacFarlane and the fall of the Soviet Regime

Robert McFarlane and the fall of the Soviet Regime Robert "Bud" Carl McFarlane graduated from the US Naval Academy in 1959 (Timburg 213) and served in the Marine Corps throughout the 60s and 70s. He had participated in the White House Fellows program and eventually became involved in the White House legislative office. He quitted his Marine Corps career and entered politics after gaining expertise in foreign policy, which was not needed or useful in advancing his military career. (Timburg 253) After Ronald Reagan was elected president in the 1980s, his political profession took off, as Reagan chose close advisors who matched his conservative political views. McFarlane, having served in the military for 20 years and fought in Vietnam, he would logically be anti-Communist due to his background. Robert McFarlane's expertise in foreign affairs and his anti-Soviet passion allowed America to take a more aggressive military and political stance against Communism during the 1980s. ...read more.

to advance the peace process in the Middle East by mediating between Israel and her Arab neighbors...Number five is to foster accelerated growth in developing countries..." (McFarlane 193-194) Some of these ideas later became essential as the White House shifted from being reactive to changes in the world to proactive of executing stress on communism. The Crisis Pre-Planning Group, or CPPG, served to anticipate the consequences of a crisis (McFarlane 195) America's economy and public confidence would be more stable if reports are conducted. For Reagan, this could also be used to reduce the bluffs that the enemies might conduct, and comprehensive measures for the cabinet could be used. McFarlane's quote also shows that during this time period, foreign and military policies could not be differentiated from one another. Besides this, McFarlane later became more famous for his role in the Strategic Defense Initiative. In late 1983, McFarlane rose to become the National Security Advisor, and had much more power over defense issues and could effectively influence the president's military policies. ...read more.

The officials involved sought to "kill two birds with one stone": By smuggling arms to Iran, US hostages could be traded back, and the money gained from the sales could also fund the Contras in Nicaragua, which the US government was also forbidden to do. Both these goals can also be traced anti-communist incentives: The US could implicitly fight the Sandinistas in Nicaragua, and could also prolong the Iran-Iraq war, which would "grind down both Gulf powers and magnify U.S. influence". (Wawro 403) Therefore, McFarlane in this case achieved his goal of blocking the Soviets before they could possibly influence Iran and jeopardize US oil supplies and subsequently our upper hand in international politics. The 1980s was an era of purposeful stress designed for the Soviets to collapse. Eventually, the Reagan and his cabinet caused enough military, economic, and political pressure, along with Gorbachev's social reforms, to dissolve the "evil empire" peacefully. McFarlane and many other foreign policy and military advisors have ensured that the USSR be met with aggression from all fields, and subsequently exhausted the last breath of Russian Communism. ...read more.