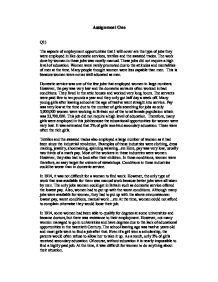 Role of women during the First World War

Assignment One Q1) The aspects of employment opportunities that I will cover are the type of jobs they were employed in like domestic services, textiles and the sweated trades. The work done by woman in these jobs was mostly manual. These jobs did not require a high level of education. Women were rarely promoted due to the attitudes and mentalities of men at the time. Many people thought women were less capable than men. This is because women were not as well educated as men. Domestic service was one of the few jobs that employed women in large numbers. However, the pay was very low and the domestic servants often worked in bad conditions. They lived in the attic houses and worked very long hours. The servants were paid five to ten pounds a year and they only got half day a week off. Many young girls after leaving school at the age of twelve went straight into service. Pay was very low at the time due to the number of girls searching for jobs as only 5,900,000 women were working in Britain out of the total female population which was 23,700,000. This job did not require a high level of education. Therefore, many girls were employed in this job because the educational opportunities for women were very low. It was estimated that 2% of girls received secondary education. These were often the rich girls. Textiles and the sweated trades also employed a large number of women as it had been since the industrial revolution. Examples of these industries were clothing, dress making, jewelry, shoemaking, spinning weaving...etc Here, pay was very low, usually two thirds of a man's pay. Most of the workers in these industries were women. However, they also had to look after their children. In these conditions, women were therefore, an easy target for owners of sweatshops. Conditions in these industries could be worse than in domestic service. In 1914, it was not difficult for a woman to find work. ...read more.

Even though men re-took their jobs in 1918, the Victorian attitudes were now abandoned. Whilst it was a long road to equality, it starts with World War 1. The changing of attitudes, lead to women getting the vote in 1918. (Get info on role of women in ww2) Although men re-took their jobs in 1918 using harsh methods, the 'Victorian' attitudes were now abandoned because World War 1 proved women's worth. Also, World War 1 acted, if nothing else, as a way of improving the long term move towards equal rights for women. Only then, would women be employed on the same terms as men. Therefore, in conclusion, World War 1 did not give any immediate results on the level of change of employment opportunities for women. However, one stage for women was now competed, which was getting rid of the 'Victorian' attitudes. After the war, women could then move on to the second stage with the wide range of skills that they learnt in World War One. Assignment Two Q1) Source A suggests that women were not equal to men. Even women from the middle class would not get the vote whilst jobless men would be able to get it. This source shows that although women managed to get in the higher ranks of society, they were yet not awarded for this by getting the vote. This shows that it is not enough for a woman to get a highly paid and highly respected job to be equal to a man. If a woman with a good job cannot get the vote whilst a jobless man can, then the source suggests that the system of the votes needs changing. The source is suggesting what more should a women do to get the vote. It shows that it is not the women that need to change, but rather, the system of the vote. However, the source might also be a message for women that being well placed in society is not enough to acquire the vote but they will have to fight for it. ...read more.

This obviously means that they were also discriminated against the votes. During the war, society was slowly moving away from the 'Victorian values.' Women played a vital role during the war and this changed many people's attitudes. However, even though women were playing a vital role, they were 'greatly resented' in farms, hospitals and factories. During the war, women had for the first time a more challenging role. By accomplishing this role, men began to think that women were responsible enough to vote. The changing of attitudes of society and government in general was an important factor that earned women the vote. However, attitudes wouldn't have changed if women did not show their capabilities during the war. Also, the changing of attitudes alone is not enough for women to earn the vote, political changes were also needed. Certainly during the war there were many political changes. At the outbreak of World War One, Emmeline Pankhurst called off suffragette actions. However, after the war there was nothing stopping them from starting again. It may have not been a serious threat to the government, but it was one that was better avoided. By 1918, there were in fact few politicians who were against women's suffrage. Women had played a vital and responsible role during the war and most of the arguments against women's suffrage were no longer valid. The Representation of the People Act in 1918, gave the government the opportunity to give women the vote without fear off appearing to be giving in to women. Political changes were the cause of women getting the vote. However, some of these political changes wouldn't have occurred if women didn't work hard during the war. I agree with the statement that 'It was the work that women did during the war that earned them the vote.' However, the cause of women earning the vote 'must not be isolated from the great social and political changes.' It is true that these changes led to women getting the vote in 1918, however, these changes wouldn't have occurred if women hadn't shown their capabilities by working hard during the war. ...read more.